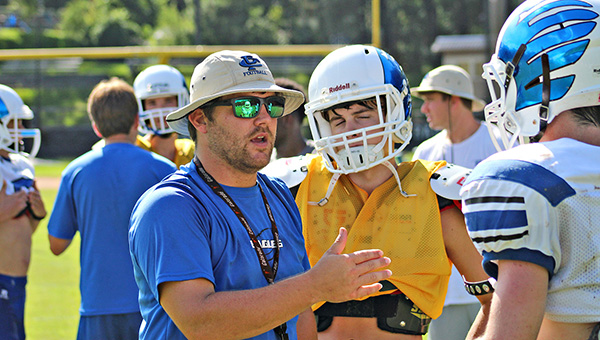 In a lot of ways, last week’s 48-0 rout of Columbus Christian in the season opener might have been the most important football game Porter’s Chapel Academy has played in several years.

The win validated the notion that the Eagles have turned a corner in their rebuilding effort, and might be on the path to a successful season.

The good vibes can only last so long, though, when another big challenge is only seven days away.

The Eagles go on the road again this Friday night to face Riverfield Academy in their District 3-AAA opener. It’s a game that truly matters — the easiest path to the playoffs for PCA might be by winning the district title — and another opportunity to cement the idea that a team that had won a total of six games the past four seasons is a legitimate threat to be a contender this year.

“It’s just using the success we had to build upon it and get better,” PCA coach Blake Purvis said. “You could tell it Friday after the game. The energy level was high. They gained a lot of confidence in each other and themselves, and if they harness it the right way hopefully it can snowball into something good.”

Columbus Christian, which only won two games in 2016, was far from the toughest opponent the Eagles will face this season. It was a foe, however, that allowed them to see what they’re capable of.

The Eagles posted their first shutout since beating Park Place Christian 44-0 in October 2014, and racked up 255 rushing yards. Senior Glenn Alan Kittrell led the way with 111 yards and two touchdowns, while Carter White and quarterback Tristan Pickering also scored on the ground.

The backs got the glory, but Purvis said it was the line that was the story. The Eagles dominated on both sides of the ball.

“Any time you control the line of scrimmage, you give yourself a chance to win and we were able to do that on both sides. If we continue to do that, we’re going to be in a position to win any game we play,” Purvis said. “That said, controlling the line is going to be a much more difficult task this week. They’re physical.”

Riverfield opened the season with a 28-20 loss to Bayou Academy, but Purvis said he came away impressed after watching tape of the game. Riverfield senior linebacker Josh Prine, in particular, stood out as a major threat.

“He’s a very, very solid linebacker. He plays downhill and finds the holes, and somehow comes unblocked every time,” Purvis said. “If you do get a hand on him, he seems to fight through it. We definitely have to account for him.”

The matchup with Riverfield marks not only an early start to the district schedule for PCA, but a crucial stretch of the season. It’s the first of three district games in a four-week span, with games against Hillcrest (Sept. 1) and St. Aloysius (Sept. 15) mixed in.

Purvis said it’s unusual to have any district game that early in the schedule, let alone three, but chalked it up to the size of District 3-AAA.

“I think that goes into we’re the largest AAA district and have five district games,” Purvis said. “The number of games we have to play is part if the reason you have to start so early, is to get them all in.”

‘Keep calm and carry on’ a smart mantra for…