Vikings go on the road to take on top-ranked Pearl 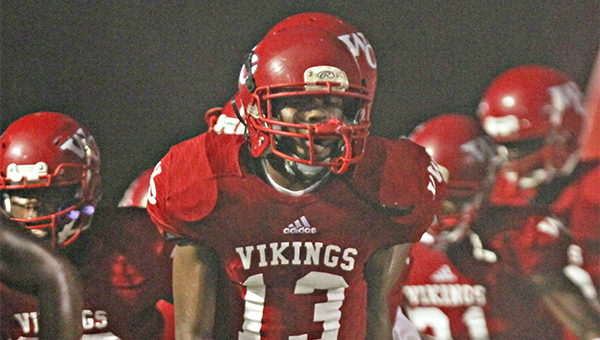 Warren Central's Jalen Allen celebrates at the start of last week’s game against Clarksdale. The Vikings will go on the road this Friday at 7 p.m. to play top-ranked Pearl. (Courtland Wells/The Vicksburg Post)

Warren Central has spent this week preparing for a high-stakes game against an old rival, with bragging rights and more on the line.

No, not that one.

The Vikings will host crosstown foe Vicksburg next week. This Friday it’s a road trip to Pearl — last year’s Class 6A runner-up and this year’s preseason No. 1 — that has their undivided attention.

“It’s fun. It’s an old rivalry. The last several years have been very competitive, down to the last second. Now with them being No. 1, this is going to be a good test and an opportunity for us,” Warren Central coach Josh Morgan said. “Any time you’re playing a team that’s in as high regards as Pearl, it’s a measuring stick. But we’re not going to be getting ready all week to measure ourselves. We’re trying to win.”

The Pearl-Warren Central series dates back to their days in the old Little Dixie Conference in the 1970s. WC leads the all-time series 22-13 and has won the last two meetings.

The Vikings won it with a last-second field goal in 2015, and then held on after nearly wasting a 21-point lead in the fourth quarter last year. Both games provided a springboard to a successful season, and they’re hoping it can do the same this time.

“We’re going to know where we are very quickly, and that’s what the non-district games are all about,” Morgan said. “This is great for us. It’s going to put our team against the No. 1 team in the state, on the road, and how are we going to handle it?”

While the two teams played each other last season, both seem vastly different 364 days later.

Pearl has nearly every starter back, and has won nine of its last 10 games. The lone loss was to Clinton in the Class 6A championship game last December. They opened with a 23-3 victory over Brookhaven last week, as quarterback Jake Smithhart threw for 173 yards and two touchdowns.

Warren Central, meanwhile, replaced 18 of the 22 starters from a 10-win team that pushed Clinton to the limit in the second round of the playoffs. This year’s Vikings beat Clarksdale 28-3 in the Red Carpet Bowl last week, as the defense scored two touchdowns and a couple of big plays provided a spark. All of the game’s points were scored in the second half.

Warren Central enters this game ranked No. 9 in the Maxpreps.com statewide poll, so it is well-regarded in its own right even during a rebuilding phase. Morgan said his squad and Pearl are really different in only one key area.

“I think we’re very similar. We have the same type of tough, physical players and some explosive skill guys,” Morgan said. “The big difference this year is they’re so experienced. That’s a really big gap between our group and theirs.”

What the Vikings lack in experience, they seem able to make up for with a combined team effort. Four different players scored touchdowns against Clarksdale, and three had touchdowns in a preseason jamboree against Ridgeland.

In addition to the two defensive touchdowns last week, one of the offensive scores was set up by a long kick return by Mason Quimby.

Morgan said he would like to see his wide receivers and offense get more involved as the season goes along, but for now he’s happy with the idea of winning via contributions from all three phases of the game — and that is exactly what will be needed to go on the road and take down the top-ranked team in the state.

“We don’t have any superstars, and for us to be successful we’re going to have to be good in three phases and get contributions all over the field,” Morgan said. “We showed signs of getting it done by committee in all three phases, and we need that to continue.”