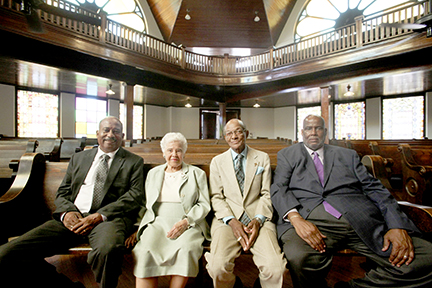 The brick church at the corner of Monroe and First East streets holds a history older than its years.

But Saturday night at 6 that history will come alive as the members of Bethel A.M.E. Church, their guests and local officials observe the 153rd anniversary of the formation of the first African Methodist Episcopal church in Mississippi.

“We’re going to honor the trailblazers — the oldest members of the church — and we’re going to give a presentation on the history of the church,” said Clarence H. Jones, a member of the church’s trustee and steward boards. “One of our pastors, Hiram Revels, was a U.S. senator during reconstruction and became president of Alcorn College.

“We are the mother church of African Methodism in Mississippi,” he said. “We had the first black college in Mississippi owned by blacks. It’s the home of the Prince Hall Masons. The Rev. T.W. Stinger, one of our pastors, founded the masonic lodge at Bethel in 1867.”

Being the mother church of African Methodism in Mississippi, Jones said, puts the church’s history in the forefront.

“We have maintained the same way we do things as they did back in the old days. Where some churches are changing and they’re trying to figure out how to bring new people in using different things, and we’re not; we’re just continually doing what we’ve been taught to do over the years. We’re still a traditional A.M.E. church.”

Jones said a lot of people wonder why the church is called African Methodist Episcopal church. “They think it has something to do with Africa, which really it doesn’t.”

He said the history of the A.M.E. church goes back to the 1700s in Philadelphia at St. George Methodist Episcopal Church, a white church that welcomed slaves, former slaved and free men to its services.

A.M.E. founder the Right Rev. Richard Allen became a preacher at the church, and was allowed at morning services.

“He brought so many black people to church they had to change the way they did services.” Jones said.

The black congregation formed it own church, but was not allowed to ordain ministers, and the district bishop conducted services. The group eventually separated and formed the African Methodist Episcopal Church so they could ordain their own ministers and maintain the Methodist Episcopal teachings founded by John Wesley.

Organized in 1864 by the Rev. Page Tyler, a missionary who came from Missouri, the congregation of Bethel A.M.E. Church bought the property where its church sits in 1868 from a white Presbyterian congregation. The Presbyterians built a church on the site in 1828, and Bethel’s congregation used it until the new church was built in 1912 at a cost of $28,000.

The first church was remodeled in 1880 with a 100-foot tower added to the building, and in 1890, the Rev. W.L. Anderson built a three-story hall in the rear of the church that became the home of Campbell College, which later moved to Jackson.

When the present church was built in 1912, eight stained glass windows were donated to the church. One of the windows was damaged during the 1953 tornado, which ravaged Vicksburg.

At one time during its history, trustee Herman Brown said, the church’s congregation included many professional people in the black community.

“We had the principals, the teachers, the undertakers; at one time all the people in the choir were teachers. The Jeffersons (Jefferson Funeral Home) are associated with the church now. The first African American black female millionaire — Sally Walker — was from our church.

“Most of those older members have passed on, and it seems like the numbers have dwindled down, but they have left that legacy to carry on,” Brown said. “I’ve been a member 70-something years, so I’ve seen them come and go. At one time, all the professional people were here.”

One of the reasons for the reduction in the congregation, Jones said, is the children who came to the church became successful and moved away.

“(But) A lot of them are (still) members; they’re away, but they still support us.”

He said having a woman for a pastor was not a problem.

“I was a delegate. The bishop brought me in and told me they were going to send her and asked me what they thought about,” he said. “I told him as long as they’re preaching the word, I wouldn’t question male or female.”

“We had just lost our pastor (Jones’ son, Quincy Jones) to a drowning,” he said. “Being a female, she was responsive to that and she was able to help the parish get through their emotions. She had good experience with that. It all was in God’s plan. She had just lost a son so we knew she would be sensitive to that.”

Despite the slowly decreasing congregation, the members are determined to keep the church’s history alive.

“I’ve studied the church’s history,” Jones said. “I’ve been keeping up with it as well as other members and previous members; we keep it up pretty good.”

Trustee John Wall said the congregation has established a foundation to seek grants and donations to preserve Bethel A.M.E. because of its uniqueness.

“We sometimes wonder how we keep it up and carry on, but we know it’s through the grace of God that we’re able to do it,” Brown said.