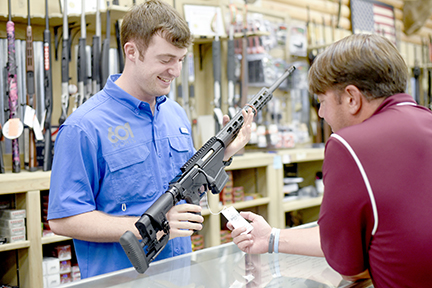 The deer and turkey hunting seasons in Mississippi will be opening soon meaning it is time for hunters to stock up on ammo or purchase new guns for the season.

This weekend, hunters will have the chance to save some money on their guns and ammo during Mississippi’s statewide second amendment sales tax holiday.

Starting Friday at 12:01 a.m. through Sunday at midnight, guns, ammo and archery equipment will be tax free throughout the state.

“I am really glad the state approved it,” Jason Martin-Nez, who owns 601 Sports in Vicksburg, said.

“We have tax-free here at the store for back to school and then adding the tax free for the guns has been a big benefit to us. Louisiana was doing it forever and we had our people driving across the stateline to purchase stuff. Now they can stay home and get a deal.”

The tax-exempt list does not include hunting accessories such as clothing, shoes or tree stands. Gun safes, game calls and fishing equipment are also not included.

“It kind of jump starts the season for us,” Martin-Nez said. “Not having it before, I know the difference now. I think maybe in the past we had a gradual buildup to hunting season and the fall and this kind of puts it all in one weekend. It is a boon and a blast off into the fall season.”

Martin-Nez said that along with the 7-percent savings customers will receive with items being tax free, 601 Sports is also discounting many of their guns either $50 or $100 and some crossbows $100.

“It is a great time to save that money,” Martin-Nez said. “The majority of people are looking to buy a pistol or a long gun this time of year and it is a chance for them to save some money.”

Martin-Nez said they expect the weekend to be a busy time for the store, but he is not sure if they will match the sales of last year, which were bolstered by the ongoing presidential election.

The full list of exempt and nonexempt items can be found at www.dor.ms.gov/Business/Pages/Sales-Use-Tax-landing.aspx by clicking on the Annual Second Amendment Sales Tax Holiday Guide link.