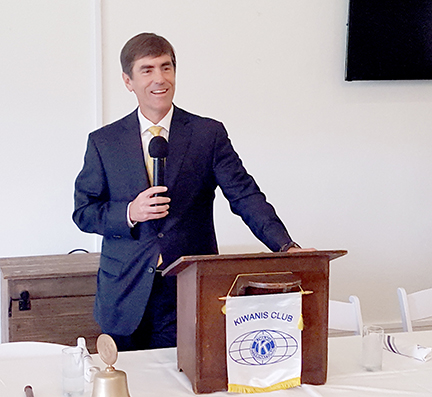 Following a legislative session highlighted by what he deemed a “tough budget year,” Mississippi state senator for District 23 Briggs Hopson discussed changes in the budget at Tuesday’s meeting of the Vicksburg Kiwanis Club.

“Frankly a lot of people were upset because almost everybody took cuts,” Hopson said. “It has never really recovered from the recession. We have picked back up in revenue, which brings us to the point where we are back kind of where we were before, but in the same time we have had dramatic increases in some other areas.”

Hopson focused much of his talk on education funding, including the cuts made to universities and colleges in the 2017-18 budget.

The Associated Press reported in April that Mississippi’s eight public universities would be raising tuition for the 2017-18 school year by an average of 6.6 percent after the legislature cut the university system’s budget by 12 percent from their 2016 expenditures. It was reported in June that the average tuition at Mississippi’s community and junior colleges would rise by 13 percent this year.

“The argument that a lot of people have is that they can charge tuition. What we don’t want to do is price it at a point where we can’t get our students into a college or a university.”

Hopson said his fear is that the rise in tuition will keep students from being able to afford the education they need to better support themselves and their families.

“They may get some scholarships, but sometimes that little bit of money is the difference between them staying in a job where they are never going to earn enough money to support themselves and their family, or getting a job where they can support themselves and their community and be a contributor to their society,” Hopson said. “It is important to try and keep that (tuition) down.”

Hopson also discussed the funding for public schools throughout the state, which is primarily provided via the Mississippi Adequate Education Program. Hopson said in recent years the legislature has also created funding sources that reward schools that show improvements in their accountability score.

“This year, we put $20 million into a plan that would reward schools that increase their grade level,” Hopson said. “You get that money back to your schools. The school itself can decide how to spend it. Do they want to use it for a teacher pay raise? They can put it into playground equipment. They can put it into new chalkboards. Whatever they want to do at their school. I think that’s good.”

“The dramatic changes in reading are just unreal when you look at the scores,” Hopson said. “Look at our local school district, the changes in reading over the last couple years have been tremendous. It is because we put an emphasis and it is not just the legislature. It is everybody.”

During his talk Tuesday, Hopson also discussed the ongoing debate in ways to improve the roads and bridges throughout Mississippi. At a Kiwanis meeting in May, Mississippi Transportation Commission Chairman and Vicksburg native Dick Hall said he was in favor of raising the state’s gas tax in order to help raise the $300-400 million a year needed to repair Mississippi’s roads and bridges.

Hopson said he would be more in favor of a hybrid plan that takes into account the damage done to the roads by trucks and the changing auto industry.

“Get ready, but combustible engineers are eventually going to be dinosaurs. They are going away,” Hopson said. “I don’t think we can rely solely on gas tax to fund roads and bridges or else we are going to be in a world of hurt in 10 or 12 years.”

He said the state needs to include a way to raise money from electric cars in the ongoing discussions and that they are going to look at hybrid plans that other states have passed.

Among all the talk of infrastructure and budgets, Hopson said one item the legislature took up this session initially surprised him before he decided to vote for it. That item was a new law requiring cursive writing to be taught in Mississippi public schools.

“Surprisingly after that bill came up, we got a lot of former teachers and folks that had been to school say we are so excited you passed cursive writing,” Hopson said. “I was overall glad it passed. It caught me off guard.”