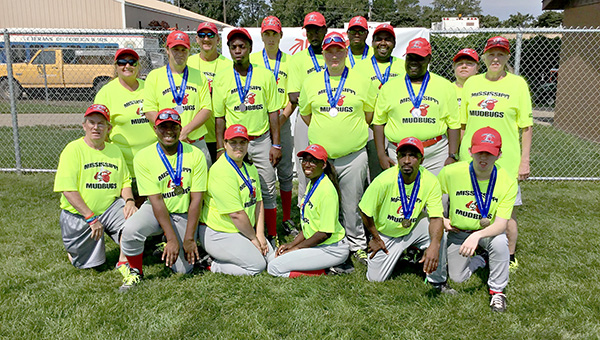 MUDBUGS: The Mississippi Mudbugs pose for a picture after receiving their silver medals at the Special Olympics North America Softball Invitational Tournament, which was held in Bismarck, N.D.

Teamwork and tenacity were key in helping a local softball team bring home the silver.

“To be on the Mississippi Mudbugs you have to be a team player,” head coach Sandy Hearn said. “There is no I in team when it comes to Mudbugs,”

This was the sixth year the Mudbugs were invited to participate in the tournament and the fourth year the team traveled to the event.

To participate, a team must be invited and qualify on the state level. The Mississippi Mudbugs were the only Mississippi team that competed in the traditional classification, which was comprised of more than 30 teams, Hearn said.

During tournament play in North Dakota, the Mudbugs won six of their seven games, Hearn said, affording the team the silver medals.

“I was really proud of them. They did a really good job,” Hearn said.

Hearn said the team they lost to this year, which was from Georgia, was the same team the Mudbugs lost to last year.

“But they only beat us by like two runs,” she said, “So it wasn’t a shutout. Our team played a good game.”

Hearn said 13 athletes made the trek to N.D. and before playing in one of the games, they wagered a bet with the five coaches.

“We had a bet with the kids that if they won a certain game, the coaches would have to wear tutus,” Hearn said.

The Mudbugs won and for the next game, all five coaches wore tutus out on the field.

“This game drew a big crowd because a lot of people just came to see us in tutus,” Hearn said.

In addition to winning silver medals, Hearn said this was one of the highlights for the team while at the tournament.

Another big moment, she said was when the athletes had the opportunity to march in the opening ceremonies for Special Olympics.

“They got to do a parade of athletes with players from all the other states. We all lined up in a group with a Mississippi sign and did a parade to recognize all the athletes,” Hearn said.

During their time in N.D., the team also had the chance to meet and socialize with other teams, some of which had come from Canada.

“Another highlight of the tournament was just meeting some of the players from the other teams. We had a team from Toronto and just sitting and talking with them at lunch and learning about their culture and what they do was very interesting for our kids,” Hearn said.

The Mudbugs also enjoyed the weather in N.D.

Hearn said the highs were around 76 degrees with lows in the mid-50s.

Ironically, one of the players from the N.D. area urged the Mudbugs to drink plenty of water. The temperatures, the player said, were supposed to reach the 90s, and it would be hot.

Hearn said she replied saying, “Honey 91 degrees is not hot to us.”

“I don’t even think our kids put out a sweat,” Hearn said, “The heat was not a factor.”

Athletes on the Mudbugs team must be at least 17 years of age and meet certain criteria.

“We do assessments on the kids and they have to be high functioning in order to go to tournaments,” Hearn said.

Acting as the quasi-scout for the team, Hearn said she attends softball games at Warren Central High School during their special Olympic events.

Athletes interested in trying out must be willing to play as a team member and be a good sport, Hearn said, and added, “They can’t be a trouble maker.”

One of the major sponsors of the Mississippi Mudbugs is Moose Lodge 1581.

“They have been one of our major sponsors for three years and they go above and beyond to make sure we get what we need. I just can’t say enough about our Moose Lodge. They have been really really good to us,” Hearn said.

The Mississippi Mudbugs have also been invited to play in the Hit A Home Run for Special Olympics Mississippi, which is a unified celebrity softball game between Gov. Phil Bryant’s “Braves” and the Mississippi Media.

“Half our team will play for the governors team and the other half will play on the media team,” Hearn said.

The game will begin at 5 p.m. Aug. 31 at Trustmark Park. A Mississippi Braves game will follow.