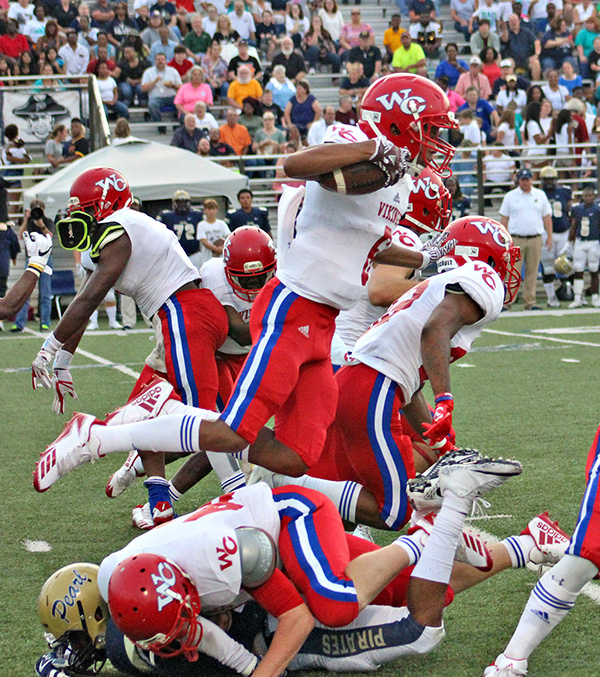 Warren Central’s Corey Wilson Jr. is tripped up while returning the opening kickoff Friday against Pearl. Wilson had 129 total yards and a touchdown, but the Vikings lost 28-21. (Ernest Bowker/The Vicksburg Post)

PEARL — Each of the past two seasons, Warren Central beat Pearl in games decided on the final play.

This time, the magic was all on Pearl’s side.

The Pirates scored 21 unanswered points, including the go-ahead touchdown on a 1-yard run by Johnny Winston with 3:16 left in the game, and beat the Vikings 28-21 Friday night in a matchup of Class 6A heavyweights.

Pearl overcame a 14-point deficit in the second half by shutting out the Vikings for the last three quarters. Winston finished with 59 rushing yards — all in the second half — while quarterback Jake Smithhart was 20-of-27 passing for 176 yards and two touchdowns.

“They’re good, and we knew they were coming. We knew they were going to bounce back,” Warren Central coach Josh Morgan said. “It wasn’t a meltdown, by any means. Those sons of guns are the number one team in the state. They were very resilient and they played like a bunch of seniors. Coming out of here, I’m really proud of our guys.”

Warren Central (1-1) got off to a great start. Walt Hopson returned an interception 23 yards for a touchdown, Fred Barnum hooked up with Colin Standish for a 28-yard TD, and Corey Wilson, Jr. ran for a 7-yard score to give the Vikings a 21-7 lead with 1:11 left in the first quarter.

They never could deliver the knockout punch, however, and Pearl (2-0) hung around long enough to claw its way back into the game.

Smithhart threw a 6-yard touchdown pass to Jaylon Stovall early in the second quarter to cut it to 21-14, and in the third the Pirates tied it with an epic 20-play, 75-yard drive. Dylan Kelly, lined up in the wildcat formation, pushed the ball across the goal line from a yard out to cap the seven-minute drive.

“I don’t know if they necessarily took over. They had a big drive in the third quarter. We did an excellent job of tackling in open space and made them earn every little bit they got. They didn’t have too many big plays, which is unbelievable,” Morgan said. “We made them march it and drive it and be good, and they were able to be good and continue the drive. That was a big drive, but it wasn’t controlling the game or anything. It was just them being able to sustain a long drive and they earned everything they got.”

Warren Central had a field goal blocked at the end of the first half and then went three-and-out on its first two drives of the second half. The next drive, in the fourth quarter, was derailed by two holding penalties and a fumble on a botched hook-and-lateral play after the Vikings had reached Pearl’s 31-yard line.

The Pirates got the ball back with 7:07 left and went on another long march. Winston capped the 10-play, 63-yard and four-minute drive with his 1-yard TD run. A bad snap seemed to nix the PAT attempt, but WC was penalized for having 12 men on the field and Pearl’s second try was good to make it 28-21.

Warren Central had one last chance. Starting from its own 21 with 3:10 to go, it converted one third down and one fourth down before stalling just short of midfield. Barnum, who finished 20-of-34 for 177 yards and a touchdown, threw three incompletions and a screen pass that was stopped for a 4-yard loss on the Vikings’ final set of downs.