NOTHING BUT THE BLUES 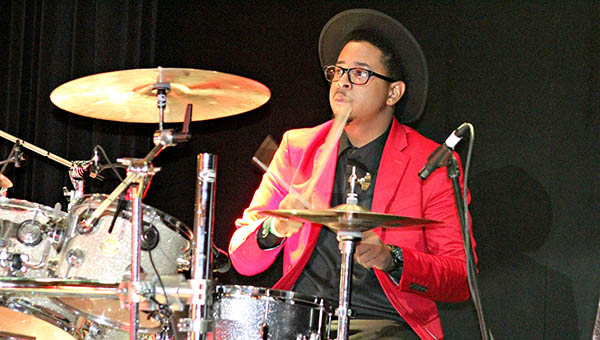 Taye Vargas, drummer for Stevie J Blues and the Squad, keeps time while the band performs a number at Sunday’s Vicksburg Blues Challenge at the Ameristar Bottleneck Blues Bar.

The sounds of America’s music floated out of the Ameristar Casino’s Bottleneck Blues Bar as some of the area’s top blues artists exhibited their talent at the 2017 edition of the Vicksburg Blues Challenge Sunday evening.

The challenge was a preliminary competition, with the winners in each division — band, soloist and duo advancing to the International Blues Challenge in Memphis, Tenn., in 2018.

About 40 people attended the 6 1/2-hour event, which featured performances by soloists, duos and bands playing a variety of selections for the audience and a panel of judges, which selected the winners. An all-star jam featuring 2015 International Blues Challenge winner Eddie Cotton closed the program.

“There is a lot of talent to judge,” said Shirley Waring, Vicksburg Blues Society president. “The competition is as good as we’ve seen. We’ve got some of the best musicians and blues musicians in the area.”

Waring said the judges for Sunday’s challenge were from the recording industry and were using the same criteria used by the judges at the International Blues Challenge. “We’re able to attract the top musicians here, because they have the opportunity to go to Memphis,” Waring said. “This is the gig of a lifetime. If they win, they get to go to Memphis and perform before professionals in the recording industry, a large audience and people from the different labels.

“Even if they don’t win and go to Memphis, they have the opportunity to perform here before recording professionals and get the exposure.”