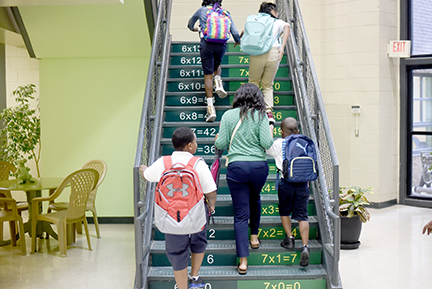 MATHEMATICAL CLIMB: As part of the emphasis on memorizing multiplication tables at Vicksburg Intermediate School, each step leading to the upstairs of the school has multiplication problems. (Courtland Wells|The Vicksburg Post)

Standing in the hallway with a sixth grade math class, Vicksburg Intermediate School Principal Sharon Williams drilled them on their multiplication tables as the students replied in a chorus of “ three times six equals 18, three times seven equals 21” as they worked their way through the threes.

The classroom instruction, breakfast time and even the school’s decorations, have been revamped this school year to place an emphasis on students memorizing their multiplication tables.

“With college and career readiness, what we are doing now, it moves at an alarming rapid pace,” Williams said. “To do the higher order thinking math skills you have to know your multiplication skills. You just have to.”

“The research supports that our six, seven, eights and nines are the most difficult for students to learn. So those are the ones we used,” Williams said. “All of our students have to use those stairs to go up to special area. Fifth and sixth graders are upstairs so they automatically go up and down every day.”

Multiplication practice has also taken over breakfast time at the school where students are tested on their knowledge while eating.

“We do a rapid recall of the facts and after we finish that I pull the flash cards,” Williams said. “It is coming. We want them to leave this level knowing their multiplication facts.”

For the students who have put the time in to learn their multiplication tables and know the answers, there is a prize waiting for them at the end of the month.

“Every morning when I come in and I do the announcements, whoever was just on fire, as we call it, with math facts, I call their names out,” Williams said. “I try to do about four to five kids a day. At the end of the month their names will go on a poster for the month and it will be displayed out in the foyer and we will do something special with them.”

This month, the plan is to reward them with snow cones, but even just the chance to hear their name called over the morning announcements has led students to put in more time practicing and learning.

“The other day, I walked in the classroom and they were writing the facts to memorize them,” sixth grade math teacher Daffney Pasha said. “I was like what are you doing and they were like, ‘we’ve got to learn these because Mrs. Williams, did you hear her call those name on the intercom? I want my name called.’”

As students advance in math through elementary school and into the junior high and high school levels, knowing their multiplication tables or not can drastically impact their ability to be successful in math leading to the new emphasis at VIS.