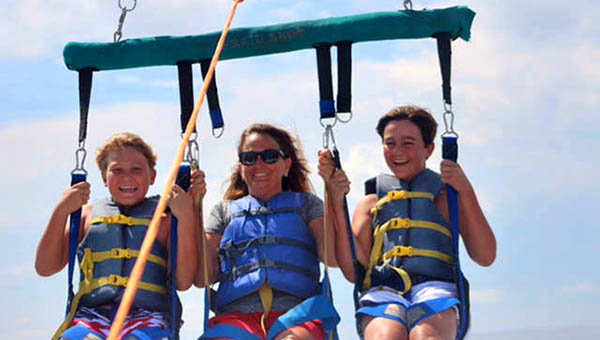 Jackie Pettway, center, parasails with her sons Jessie Hallberg, left, and Josh Hallberg on a family vacation. Pettway will be inducted into the Vicksburg Warren School District Hall of Fame on Thursday night at City Audtorium as part of its Class of 2017. (Submitted to The Vicksburg Post)

Note: This is part of a series of stories profiling the members of this year’s class of the Vicksburg Warren School District Athletic Hall of Fame.

“From as young as I can remember, I remember riding in the back of a truck to the LeTourneau fields to play softball,” she said.

Those early memories sparked not only a love of games, but a competitive fire that has driven her to be the best she can be in all facets of life. From starring on the athletic fields at Warren Central and then Mississippi College, to earning a Ph.D in civil engineering, Pettway has conquered every challenge thrown in front of her.

It’s a winning character trait that made her a hall of famer.

On Thursday night, Pettway will be inducted along with six other local sports legends into the Vicksburg Warren School District Athletic Hall of Fame. The ceremony begins at 6 p.m. at Vicksburg City Auditorium. Tickets are $20 and are available at the VWSD athletic office on Mission 66.

“It’s great. I love the fact I’m being inducted with Coach Morgan. His wife Cathy was one of my coaches. There’s all these other people that are deserving to go in there. It’s an honor to be recognized,” Pettway said. “I’ve been thinking about my speech and the people that helped me in my career. There have been so many people, and I think the key to it is having great coaches and mentors.”

Pettway made her biggest mark in softball — after starring for Warren Central, she played at Mississippi College and led the team in hitting in 1996 with a .407 average — but also dabbled in almost every other sport on the menu.

She ran cross country and played tennis in high school “if they were short and needed someone,” she said, and was a starter on the basketball and soccer teams. She lettered in all five sports and was selected as WC’s female athlete of the year in her senior year of 1993.

Pettway’s drive to excel went beyond the athletic field. She graduated in the top 10 in her class at Warren Central, and then from Mississippi College, and went on to receive her masters degree in engineering from Mississippi State in 2001. She got her doctorate from MSU in 2010.

All the while, she raised two sons, coached youth softball and basketball teams, and even gave personal lessons as fast-pitch softball became the predominant form of the sport in Mississippi.

“I’m not productive if I don’t have five or six things going on at the same time,” she said with a laugh. “I wouldn’t trade anything for it. I enjoy it.”

VWSD HALL OF FAME
The induction ceremony for the Vicksburg Warren School District’s Athletic Hall of Fame Class of 2017 is Thursday at 6 p.m. at City Auditorium. Tickets are $20 and available at the VWSD athletic office on Mission 66.