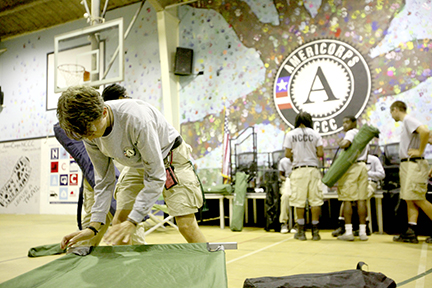 AmeriCorps NCCC member Steven Driest works to set up a cot before leaving to travel to Dallas, Texas to serve with American Red Cross relief efforts in the aftermath of Hurricane Harvey Tuesday at the AmeriCorps NCCC Southern Region Campus in Vicksburg. (Courtland Wells/The Vicksburg Post, via AP)

More than 30 volunteers through AmeriCorps have left Vicksburg to assist victims of the devastating flooding that has taken place in south Texas.

Members of the National Civilian Community Corps, a high mobility branch of AmeriCorps that responds to natural disasters, loaded into vans Tuesday headed for Dallas, where they will help staff an American Red Cross mega-shelter at the Convention Center to assist those displaced by Hurricane Harvey.

Rick Smith, deputy director of programming at the NCCC campus on Confederate Avenue where the volunteers train, said the NCCC members, who range in age from 18-24, had just been assigned their projects when they received notice of this new project to assist the victims of Harvey.

“They got back to Vicksburg and have been waiting since Saturday night,” Smith said. “The flooding event has been so bad that the Red Cross told them to hold in place.”

The three teams, which consist of nine to ten members, are from 11 different states.

“They’re from all over the country,” Smith said.

Once the floodwaters recede in Houston and other areas of south Texas, more NCCC volunteers are expected to depart from Vicksburg to lend a hand to the victims.

“This is just the first wave,” Smith said. “I expect more and more teams from Vicksburg to head that way once we get assignments for them. Vicksburg has become quite a hub for responding to natural disasters.”

The NCCC volunteers will also deploy to help with the cleanup in the aftermath.

“They will help with the mucking and gutting of individual homes,” Smith said. “It’s a physically grueling task.”

Meanwhile, members of the FEMA Corps continue to train in Vicksburg and will head to Texas in the coming days, according to Smith.

Smith said there are 260 volunteers from Baltimore and Vinton, Iowa, training at the campus in Vicksburg and will be involved in administrative roles with FEMA.

“They will go door-to-door to make sure residents are aware of FEMA resources and will also staff disaster recovery centers, where survivors will come to them,” Smith said.

For more information on the NCCC, visit americorps.gov/nccc.