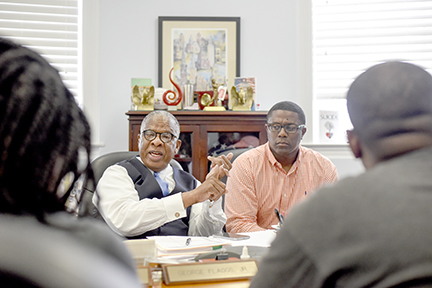 The Randy J. Naylor Foundation and United Way of West Central Mississippi are organizing a relief effort to collect donations of supplies and money to help people in Texas affected by Hurricane Harvey.

The storm hit the Texas Gulf Coast Friday as a Category 4 hurricane and remained stationary over the Texas Coast for the past five days, dumping large amounts of rain on the area. The storm has dumped more than 30 inches on Houston, Texas, causing widespread flooding and forcing people to be rescued from their homes.

The Randy Naylor Foundation is dedicated to helping youth and providing opportunities for youth to help their community. The Naylors, who are Vicksburg natives, return to the city in the summer and on holidays for community service work.

“We (the foundation) wanted to maximize our efforts to help the victims of the flood, and we were trying to find a way to still meet our mission and take care of people in that area, “ Tonya Naylor said. “The best way we knew was what we’ve always done. To reach out to our partners that we’ve already established and to utilize our kids, so they can show the best part of themselves.

“We started first to reach out to United Way and from there formalize a plan, to make sure the entire city has a chance to show the world the best of what we have to offer. It’s very important at this time to make the most of what we have, because you never know when you might be in need.”

The city, however, will not be a participant in the effort.

Mayor George Flaggs Jr. said the city is prohibited by state law from getting involved in any of the relief efforts. City attorney Nancy Thomas told the group a check with the Attorney General’s office said state law prohibits the city from participating in anyway in a relief effort outside of the state.

“It’s a sad day when you have a devastation, that the city of Baton Rouge and all these cities came to our aid and then you have one of the biggest devastations in the United States and we can do nothing,” Flaggs said.

Connelly said a meeting of church and civic groups interested in helping with donations to the Houston area will be held Thursday at 4:45 p.m. at the United Way offices on South Street.

“The plan is to mobilize all of our partners here, find a central location to donate, then take a massive donation to Houston versus small,” Tonya Naylor said. “To get it right to individuals who need it, because we are from the city that’s impacted, we would know. People would have a peace of mind knowing what they gave is going straight into the hands that need it most.

“That’s very important to us.”

Connelly said the meeting Thursday will establish a list of specific items and collection sites for those items.

Presently, there are three collection sites: Calvary M.B. Church on Klein Street, Greater Grove M.B. Church on Alcorn Street and space in the Vicksburg Mall formerly occupied by Play-land, which is located by Belk. The mall site will open Friday at 9 a.m.

Connelly said United Way will act as the fiscal agent for all donations of money.

The Naylors left Houston, where they work as teachers, on Thursday, ahead of the storm. Right now, they said, they cannot get to their home, and access to Houston is restricted because of the emergency.

“A lot of our friends did not leave because they didn’t think it was going to be that bad,” Tonya Naylor said. “In the past, when they said leave, it wasn’t that bad, but I’m from Mississippi, and we don’t play with water.

“You don’t know if the kids you work with every day, if you’ll seen them again, because the families have been displaced, separated,” Randy Naylor said. “Our scholarship recipient from Houston, her family has lost everything.”

Tonya teaches at Texas City High School, which is underwater. J. Frank Dobie High School, where she taught last year, is a Red Cross center and available only by boat, she said. “It’s five minutes from my home. Four thousand kids (at that school) have no school, now.”

Randy works at Smith Academy, an elementary school, which is also underwater. He showed a photo of the entrance to their neighborhood with a truck plowing through high water.

“All our friends are saying they’re stuck; you can’t go within two miles of your home, and if you go past two miles, you’re into nothingness,” Tonya Naylor said.