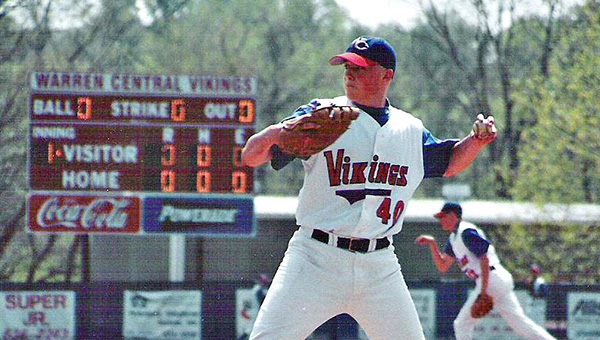 Taylor Tankersley throws the ball during his senior year of high school at Warren Central in 2001. Tabkersley, who went on to pitch in the majors with the Florida Marlins, is among seven local sports legends who will be inducted to the Vicksburg Warren School District Athletic Hall of Fame on Thursday night. (Courtesy of Tom Tankersley)

Note: This is part of a series of stories profiling the members of the Vicksburg Warren School District Athletic Hall of Fame’s Class of 2017.

After he’d reached the major leagues as a pitcher with the Florida Marlins, Taylor Tankersley said he and his teammates would trade stories about their high school and college teams.

Some, including Tankersley, had played at college baseball factories in the Southeastern Conference or Pac-12, or had hardscrabble tales of growing up on ragtag fields in the Caribbean. Eventually Tankersley would get to talking about his experience at Warren Central and would win the day.

“At that point I was playing with guys from all over the world who were good. We would share stories of what it was like playing in Vicksburg, Mississippi, or elsewhere, and my experience trumped everybody else, hands down,” Tankersley said. “I played with guys from Long Beach State. Half the guys on the team made it to the majors, and their games would get like 700 or a thousand people. We’d get that in high school, and we’d be on the front page of the sports section or on the news.”

It was a special time for the Vikings, and Tankersley was a special player. He was the ace pitcher on Warren Central’s 2001 Class 5A championship team and went on to become the first player from Warren County selected in the first round of the Major League Baseball draft.

On Thursday, Tankersley will be inducted to the Vicksburg Warren School District Athletic Hall of Fame as part of its Class of 2017. The ceremony begins at 6 p.m. at Vicksburg City Auditorium. Tickets are $20 and are available at the VWSD athletic office on Mission 66.

“It’s pretty cool,” said Tankersley, who now lives in North Carolina. “I know the cliché is to say it’s humbling, but it is. It’s very special. The biggest thing is the people who are going to get to celebrate it with me.”
Those people included some players and coaches who accomplished a lot in their own right. Eight of the nine starters on the 2001 Warren Central team went on to play at least junior college baseball.

Coach Sam Temple has spent the past 12 years as the head coach at Hinds Community College, where he’s won three MACJC state championships and led the Eagles to a national runner-up finish in 2014.

Teammate Brian Pettway won the Ferriss Trophy as Mississippi’s top college player with Ole Miss in 2005, and another former Viking Craig Newton was a finalist the same year while leading Delta State to a Division II national title. Several others played for Division I teams.

Tankersley said playing with those driven, talented players — and, just as importantly, being around the parents who recognized, cultivated and harnessed that talent — was instrumental in his baseball success.

Instead, Tankersley reached the pinnacle of his sport. In 2001 he went a perfect 13-0 with a 0.44 ERA and 165 strikeouts as the Vikings finished 36-3 and ranked No. 4 nationally by USA Today. He played at the University of Alabama and was the Marlins’ first-round draft pick in 2004.

Tankersley played parts of four seasons with the Marlins as a middle reliever before retiring at the end of the 2011 season. He made 168 career appearances in the majors, and is among just a handful of players from Warren County to make it that far.

All of it, he said, was made possible by the way things came together for a few years and a few guys in a small town in Mississippi.

“It was a perfect storm of ingredients as far as the coaches, the parents and the media, and it was memories that none of us will ever forget,” Tankersley said. “We were really, really good, and I was a product of my environment, and that environment was spectacular. I would not be getting into the hall of fame without all of those ingredients.”