Moms and sons get to play super heroes 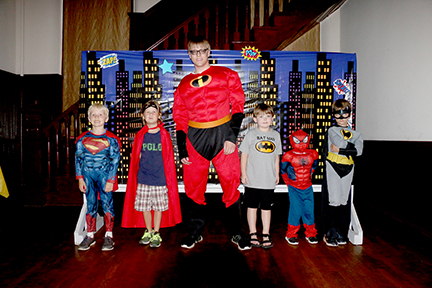 CRIME FIGHTERS: Super heroes pause for a moment from saving the world to pose for a picture during the “Show With My Superhero.” The event was a fundraiser for the Southern Cultural Heritage Foundation and was geared for mothers and sons. Heroes pictured from left, are Asher Rice, Matthew Appleton, volunteer Gray Houser, Oakley Flowers and Owen Flowers. (Terri Cowart Frazier, The Vicksburg Post)

Super heroes converged on the River City Sunday, keeping at bay any villain who may have been planning a dastardly deed.

From Batman to Spiderman to Superman, these defenders of justice were ready at any moment to protect the planet from evildoers; however, the intent of the gathering was to spend time with mom.

The Southern Cultural Heritage Center played host to the inaugural “Show With My Superhero.” The event was an opportunity for mother and son to spend time together, and it included a screening of the “Lego Batman” movie.

Attendees were also encouraged to wear their favorite superhero costumes.

Ellis Campbell was dressed as Spiderman, but said his favorite super hero was Batman.

“I have his bat castle, and he has those bat throwing things,” Campbell said.

His best friend, Noah Ponder, agreed that Batman was awesome.

“Batman is my favorite because he has cool skills,” Ponder said.

Ellis Campbell’s mother, Amy, was also dressed for the “Show With My Superhero” event.

“Any time there is an opportunity to dress like a super hero, we are there,” Amy Campbell said.

Helping with the event were SCHF board member Stacey Teller and St. Aloysius High School student Gray Houser, who were outfitted in Mr. and Mrs. Incredible costumes.

Houser said Teller asked if he could help and gladly accepted.

“I couldn’t say no because this was something for the kids,” said Houser, who was also caught flexing his Mr. Incredible muscles during the evening and posing for pictures with many of the children.

Prior to the screening of the movie, musical tracks from super hero movies were pumped through speakers at the SCH Auditorium, as the pint-sized protectors flew (ran) around pretending to fight with the enemy.

Stacey Massey Mahoney, who serves as the SCHF executive director, said combined, more than 30 mothers and sons attended the Sunday event, which served as a fundraiser for the SCHF.

The proceeds from the “Show With My Superhero,” Mahoney said will go into the SCHF’s general fund.

“Due to the collapse of the wall on the old convent, our insurance has increased and this has encouraged us to do some additional fundraising,” Mahoney said.

Also, as an added fundraising event for the SCHF, a father/daughter princess ball has been scheduled.

Details are still being finalized, but the date has been set for Sunday, Nov. 5.

And because of the success of the “Show With My Superhero,” Mahoney said the SCHF would offer a repeat event.

“We could not have asked for it to go any better, and we know we will do another one in the near future,” she said.

Mothers who attended the event with their sons agreed that the evening was a success.