Nasif a product of unique period 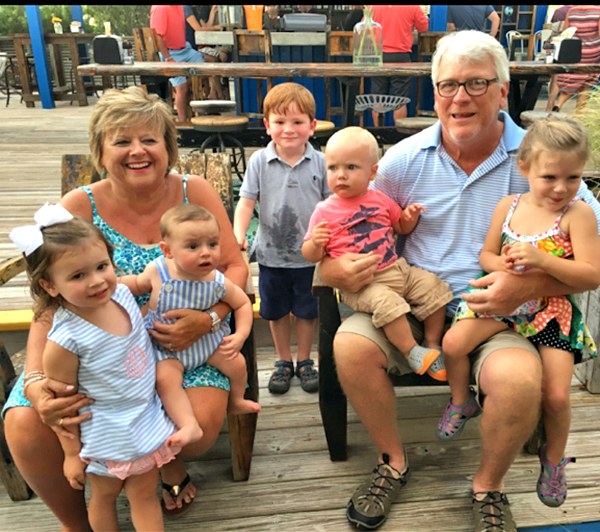 George Nasif poses for a photo with his wife, Judy, and their grandchildren Lucy, Bo, Andrew, Max and Mia. George nasif will be inducted into the Vicksburg Warren School District Athletic Hall of Fame Thursday at 6 p.m. at Vicksburg City Auditorium. (Submitted to The Vicksburg Post)

Note: This is part of a series of stories profiling this year’s members of the Vicksburg Warren School District Athletic Hall of Fame

Like most of the other members of the Vicksburg Warren School District’s Athletic Hall of Fame Class of 2017, George Nasif said he thought there were dozens of other players from the last 45 years as worthy of induction as he was.

“There were eight or 10 people that signed Division I scholarships, and that was just from one half of Vicksburg,” Nasif said, before rattling off a list of his teammates and contemporaries.

If asked, however, most of the others would probably put Nasif on their own lists.

Nasif was a three-year starter at linebacker for South Vicksburg High School from 1970-72 and led the team in tackles all three seasons. He also lettered multiple times in baseball, basketball and track and field.

After high school he went on to start 33 games over three seasons as a defensive back at Ole Miss.

It was the kind of career that not only put him in the discussion for this year’s Hall of Fame class, but made him one of the seven people who will be inducted Thursday night at the Vicksburg City Auditorium.

The induction banquet will begin at 6 p.m. Tickets are $20 and are available at the VWSD athletic office on Mission 66.

“First, I have to thank my wife Judy. She’s been by my side this whole time,” Nasif said. “I’m humbled and honored. It was a long time ago. That’s almost 40 years ago. During those times, we started it all. It was time to change and it was a big deal. We didn’t know what to expect.”

In a lot of ways, Nasif represents a strange time in Vicksburg’s sports history. South Vicksburg High School really existed in name only, and then for just two years when the city integrated its schools in the early 1970s.

In many other places in Mississippi and the South, it was a turbulent time of racial strife. Nasif, however, said Vicksburg felt relatively calm on that front and sports was a big reason why.

Temple was a football and basketball power in the 1960s, and a draw for sports fans of both races. Players from Temple and the city’s other high schools also frequently played pick-up games together on the weekends. Nasif said the common bond of sports bridged the racial divide and eased the process when it came time to go to school and play together on the same teams.

In 1973, the year after Nasif graduated, Vicksburg High won the Big 8 Conference football championship — the equivalent of a state title today — in the first year of full integration.

“Through sports we got together and it was an easy way to get to know each other,” Nasif said. “Sports broke those barriers down. We didn’t have any problems.”

The biggest problem the players faced, Nasif joked, was keeping a coach.

Whoever was leading the teams, Nasif was a star and South Vicksburg was a success. He helped the football team to an 8-2-1 record in his senior season in 1972, and then went on to be a star at Ole Miss as well.
The 180-pounder was moved from linebacker to defensive back and started every game in the 1974, ’75 and ’76 seasons. He finished his college career with 70 solo tackles and five interceptions.

“I started all 33 games at Ole Miss. I don’t like to talk about it much, but that is an accomplishment. There’s not a lot of people fortunate to go to college and play,” Nasif said.
All in all, it turned out to be a pretty solid career for a guy who still claims he was nothing special.
“I was just another athlete,” he said. “I guess I just stood out.”
VWSD HALL OF FAME
The induction ceremony for the Vicksburg Warren School District’s Athletic Hall of Fame Class of 2017 is Thursday at 6 p.m. at the Vicksburg City Auditorium. Tickets are $20 and available at the VWSD athletic office on Mission 66 until 1 p.m. Thursday. They will also be available at the door at City Auditorium.