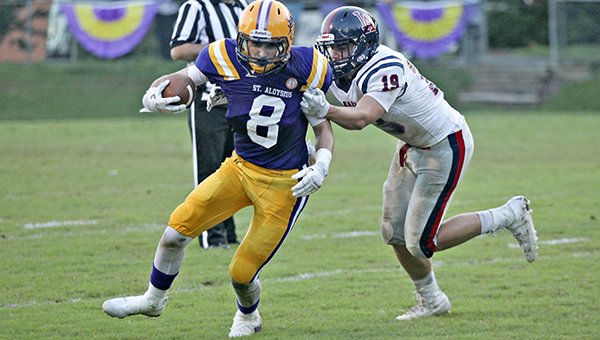 When the St. Aloysius Flashes look at the standings, it’s impossible to ignore the 0-2 record staring back at them. They certainly don’t want an 0-1 mark to join it, which makes Friday’s home game against Central Hinds crucial despite its early placement in the schedule.

The Flashes host Central Hinds in their District 3-AAA opener Friday at 7 p.m. While an 0-3 start isn’t impossible to overcome and reach the Mississippi Association of Independent Schools playoffs — St. Al did it last season — every loss makes the hole that much deeper to climb out of, and every district loss makes it harder still.

“There’s no sense in sugarcoating it. It’s the biggest game of the year,” St. Al coach Michael Fields said. “It’s a big game for the district, and our namesake. After three games, everybody is looking for a win.”

Getting to play a district game might be just the thing St. Al needs to cure its woes.

Since joining the MAIS in 2015, the Flashes are 7-1 against district opponents and 1-17 against everyone else. The one non-district win was in the first round of the 2015 playoffs against Bayou Academy.

The differing fortunes have legitimate causes. Waves of early-season injuries combined with difficult schedules the past two seasons have led to St. Al compiling a 1-14 record in August and September since the start of the 2015 season. The district games were backloaded on the schedule in 2015 and 2016, and the team has gone 7-3 in October and November.

The difficult early-season schedule continued this year with Leake Academy and then ACCS, which Fields noted will help the team’s power point ranking if it needs to chase a wild card berth later on. He would rather the Flashes start controlling their own destiny, however.

“It shows you the importance of every game, especially in the MAIS,” Fields said. “The good thing is, we’ve played two teams that are going to get a lot of wins, so that will help us, but at some point you’re going to have to handle your business.”

The Flashes hope that business involves beating Central Hinds for the third year in a row. The Cougars are also 0-2 and in need of a victory, after losing to ACCS and Bayou Academy in their first two games.
Both St. Al and Central Hinds play three of their next four games within the district, making Friday’s game pivotal both for momentum and potential tiebreakers.

“We’re both in the same situation. We both started with a tough non-district and we’re both 0-2,” Fields said. “With the weather situation, it’s going to come down to who’s going to make the least amount of mistakes.”

After last week’s loss to ACCS, there is ample concern that that might be the Flashes. They committed five turnovers in the 40-14 loss, and with plenty of rain in the forecast for this Friday the potential is there for another sloppy game.

Fields said some of the turnovers last week were caused by too much effort, such as players having the ball stripped while fighting for extra yardage, and he’s hoping experience reduces those mistakes.

“We’re on the right path. The disappointing part is when you make turnovers and don’t play as clean as you want to play, and that’s what happened to us last Friday night,” Fields said. “I think a lot of it was the kids trying to overcompensate and doing too much. Sometimes you have to learn to say ‘when’ when you’re running the football and just get down.”