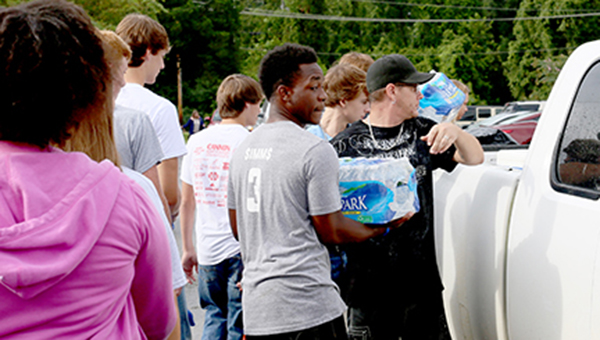 Vicksburg and Warren County can expect the possibility of tornadoes, flash flooding and high winds as the remnants of Hurricane Harvey move northeast across north Louisiana and western and northern Mississippi Thursday.

“We are looking at the threat of tornadoes and flash flooding, and winds of 30 to 35 mph with gusts as high as 50 mph, and that means we could have some trees go down,” Warren County Emergency Management director John Elfer said. “We’re expecting rainfall of 1 to 2 inches, and up to as much as 5 inches is possible in some areas.

“I want to remind people not to drive through flooded roads or streets. They need to stay away from flooded areas.”

After hitting the Texas Gulf Coast Friday as a Category 4 hurricane, Harvey remained stationary on the Texas Coast, dropping more than 50 inches in the area and more than 30 inches on Houston, Texas.

It went back into the Gulf of Mexico Tuesday night, moved east, and went onshore again as a tropical storm at Cameron Parish, La., between the Texas state line and Lake Charles, La. Its projected track puts it northwest of Monroe, La., as a tropical depression about 7 a.m. Thursday, and in North Mississippi by 7 p.m. before moving into Tennessee.

Meanwhile, students, faculty and parents from Porters Chapel Academy donated and loaded up relief supplies Tuesday and left Wednesday morning for south Texas to assist the victims of Hurricane Harvey.

Jason Tillman, who assisted in loading up a half dozen boats and trucks with the aid relief items, said the drive was quickly organized and the community responded.

“One of the parents said he was going down there to assist and offered to bring supplies,” Tillman said. “It was just one day notice and they were able to fill up six or eight boats and trucks and headed down there.”

Tillman said the caravan was headed for south Houston, but could wind up in Beaumont or wherever they’re needed.