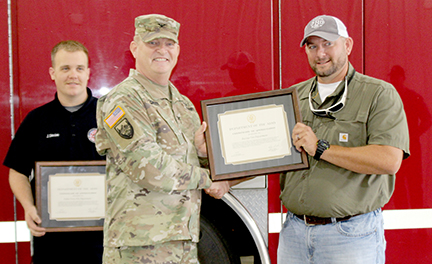 VOLUNTEERS HONORED: Chris Kennedy, right, a captain with the Bovina Volunteer Fire Department, accepts a certificate from Col. Bryan Green, commander of the U.S. Army’s Engineer Research and Development Center, commending Bovina for its efforts to help ERDC during the city’s water crisis in May, as Fisher Ferry fire chief Josh Davies, left, looks on. Bovina and Fisher Ferry were both commended by ERDC for their help with water for chillers to keep the center’s supercomputers going during the crisis. (John Surratt, The Vicksburg Post)

When a broken valve on the city of Vicksburg’s main water line forced city officials to shut down water service for almost four days in May, the Fisher Ferry and Bovina Volunteer Fire departments helped keep the Department of Defense’s computer systems running.

Wednesday, Green and ERDC honored Fisher Ferry and Bovina for their efforts in helping the center when the water system went down, presenting both departments with framed certificates during a ceremony at the Fisher Ferry station.

“It was that help with water that actually kept us in the fight, actually serving the nation and Afghanistan, and soldiers down range,” Green said. “At the same time, we sent our engineers out to go help them (the city) engineer the cofferdam to get to the actual broken valve so they could get to it effectively.

“It’s a mutual relationship that’s very beneficial, and the fact what you guys did in a volunteer nature as part of our mutual support kept us in the fight; you kept the USACE reach back operation in the fight.

Fisher Ferry fire chief Josh Davies said the department was able to move 2,000 gallons to ERDC during the crisis.

“For us, our job is to help the community any way we can,” he said. “One of our staff members is an employee out there and was asked if we could supply water out there for a short amount of time. We agreed to and we put a truck out there. Bovina Fire department put some equipment down there and we assisted each other.”

Mitch Lange, assistant Fisher Ferry fire chief, works as a contractor for SDAC, which maintains the chillers that keep the supercomputers going.

“When the city dropped water pressure, I told my boss that I had a fire truck, and if I could get it here, we could start pumping water.”

He drove to the Fisher Ferry station on Lee Road, got one of the pumpers and began shuttling to keep the cooling towers operating. Bovina, he said, provided a tank that could hold 4,000 gallons. Lange said it took shuttling water for four hours before the system was able to maintain a water supply to keep the chillers going.

“I’ve been in other stations and locales where that type or mutual cooperation and support isn’t that easily available, and this is amazingly easy and simple because I think of the mutual relationships we have,” he said.

“And at the same time, we were able to provide assistance they (the city) needed with some concerns about engineering and the flooding, so they could actually get to the relief valve.

“It’s really nice to be in a place where we have friends and families who work both in ERDC and in and around the city, and the fact that we can collaborate so easily when we have mutual needs.”