16 pallets of water from Vicksburg going to relief effort 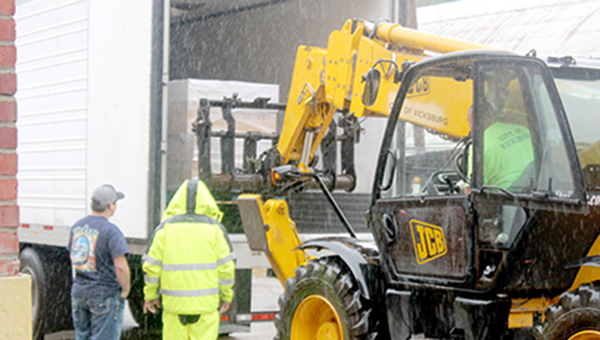 Roy Hearn loads a pallet full of water to be donated to area impacted by Hurricane Harvey into a semi-truck that will be driven to Houston. (Brandon O'Connor/The Vicksburg Post)

The remnants of a local crisis have turned into an act of charity for the city of Vicksburg.

Thursday afternoon the city partnered with area churches and the American Red Cross to donate 16 pallets of one-gallon water jugs to the areas impacted by Hurricane Harvey. The water was leftover from the water crisis that occurred in Vicksburg in May.

“We were so blessed that so many communities from all over the place were able to help Vicksburg and Warren County,” John Elfer, Warren County Emergency Management Director, said. “It only made sense that we could return the favor to an area that had been impacted like they have been. We knew we had the resources. We have other water in case we need in locally. This is not going to be a burden on us. It is something that worked out really well that we were able to do.”

The water and other supplies are being collected by churches in Hinds, Rankin and Madison counties in cooperation with the American Red Cross. The semi-truck that was loaded with water from the city of Vicksburg is one of three that will be sent to Texas full of supplies.

“We were all trying to figure out what we were going to do and I got a call that they were getting a group of churches together,” Paul Moore, the pastor of Christ Life Church in Jackson, said. “We all partnered together, between 10 and 15 churches. We decided to get together and see what we could do. It is just growing. The Red Cross has jumped on board with us.”

The water and supplies that are being collected will be taken to two distribution centers in Houston where churches in impacted areas will be able to collect supplies.

“They are distribution points for other churches,” Troy Costanza, lead pastor of Highland Chapel Church in Madison, said. “The way it works is, we drop it at specific churches and the other churches come in and pick-up supplies and bring it out to their churches.”

The group is collecting personal hygiene items, tarps, blankets, food and more to donate to people impacted by Harvey. The plan is to send the water and other liquids first using three donated semi-trucks and then follow behind with lighter items in smaller trucks.

Moore said that within 24 hours of the first meeting, the group had all of the water committed and the trucks to haul it in place. The plan is to have all three semis loaded and on the way to Houston by Monday at the latest.

“It is cross denominations, across racial barriers, across county lines,” Costanza said. “It is everybody saying we are doing this together. I would like to call this whole operation Church United, because it is not one church. When we pull together, we are stronger together. When we serve together, we can make a greater impact.”