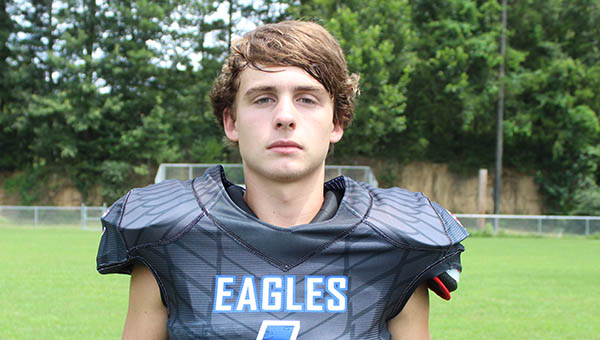 Blake Purvis knows that his Porter’s Chapel Academy team has to start stronger if they are going to continue winning games this season.

But the Eagles’ head coach took one positive away from a 39-21 loss to Riverfield Academy last week.

“I told our guys after the game that the one thing that I was proud of is we didn’t quit,” Purvis said. “They kept fighting to the end. There was some fight in them. We did some things offensively that we have not done. We threw the ball well, pass protected well. So there’s definitely stuff we can build off of. We did well in the second half, it was just too little too late.”

The passing game Purvis referred to was sophomore quarterback Tristan Pickering, who went 11-of-22 for 294 yards and two touchdowns against Riverfield. Pickering’s performance was the best by an Eagles quarterback since the 2013 season, when Jonah Masterson threw for 305 yards. Collectively, PCA scored 21 of the game’s final 28 points against Riverfield after falling behind 32-0 in the third quarter.

PCA’s running game was limited against Riverfield, as opposed to the week before when it ran for 255 yards in a 48-0 win against Columbus Christian. Purvis still wants the identity of his offense to center around running the ball, but acknowledged that a solid passing game will help open the offense up more.

“We’re going to run the ball until we can’t run it,” Purvis said. “It definitely helps being able to pass, it’s going to help open up our run. (We’re) going to try and mix that pass game in a little bit more but still lean heavily on the run.”

If there is a game for the offense to come together, it should be this Friday when the Eagles (1-1, 0-1 District 3-AAA) host Hillcrest Christian (0-2) in their home opener.

This game is important for PCA because it’s a district opponent. But it’s even more important because of last week’s district loss. Another loss this week puts them at 0-2 and makes a district title tough to attain. PCA is also in the middle of a stretch that has them playing three district games in four weeks.

Purvis knows that this week needs to have a sense of urgency.

“We definitely need to get the district win,” Purvis said. “We’re not out of it because of the size of our district. Everybody’s got to play five district games. It’s not like a three-team district where if you lose one (game) you’re pretty much out of the district race. There’s a lot of football left to be played across a fairly even district. But you’ve got to bounce back and not fall too far behind.”

The PCA offense has already surpassed last season’s total scoring output, putting up 69 points in the first two weeks as opposed to 54 in the entire 2016 season. The combination of putting up such prolific numbers and an opposing team that has struggled defensively could make an offense complacent, but the Eagles are trying to stay consistent and make sure that does not happen.

“We have to go out and do what we do and do what we’re built on,” Purvis said. “But there are some opportunities if we execute. But this should be every week if we execute well. And it starts up front on the offensive and defensive lines. If we can control the line of scrimmage then we can make a mark every week on the scoreboard.”