Gators out to end pair of losing streaks vs. rival Warren Central 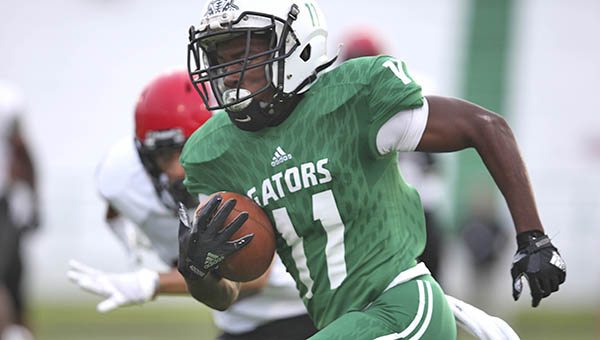 The Vicksburg Gators don’t need to beat Warren Central on Friday night to make everything right with the world again. That just happens to be who they have to beat to do it.

After two weeks of struggle and frustration, the Gators head across town to face the Vikings in the annual River City Classic rivalry game. Warren Central has a five-game winning streak in the series, including a forfeit victoryi n 2012, but ending the current two-game slide to start this season is a bigger goal for the Gators.

“You always circle it on your calendar. It’s a big game for us. But we really just have to get in a mood and just focus on it,” Vicksburg senior quarterback Joe Johnson said. “We need a win, whether it was Warren Central or Canton. Whoever we’re playing, we need a win. But this one means a lot. Maybe this will be the game that gets us into gear and gets us going in the right direction for the rest of the season.”

The Gators’ biggest issue so far has been a young and bruised offensive line. Vicksburg has just 35 rushing yards in two games and allowed seven sacks in last week’s 35-6 loss to defending Class 6A champion Clinton.
Only one starter on the line returned from last season, and he missed last week’s game with an injury. Running back Mike Sims also left the Clinton game with an injury and is questionable for this week.

The lack of a running game has had a ripple effect on the Gators’ overall performance.

Without the threat of the run, defenses have been able to key on Johnson and the passing game and make the offense one-dimensional. That, in turn, has led to a lack of overall production — the Gators only have 309 total yards in two games — and kept the defense from getting a lot of rest.

As the defense wears down, opposing offenses take advantage. Vicksburg has allowed 14 points in the first half so far this season, and 42 in the second half.

“The running game always helps the offense and the passing game. Not being able to get it going definitely makes it tough on our defense,” Vicksburg coach Lorenzo Breland said. “It’s one of those things where we have to be able to put it together on offense, defense and special teams.”

Warren Central is an opponent that has done those things, and could present a matchup problem for the Gators. WC has scored three defensive touchdowns already this season and has had three different players score on offense.

Another big task is shutting out the noise and chatter surrounding the game. The Vicksburg vs. Warren Central matchup has been referred to as Warren County’s Super Bowl, and the trash talking — friendly and not-so-friendly — that comes with it is sometimes hard to ignore.

Johnson, who has been the varsity starter for three years now, said he’s learned to roll with and have fun with the hype surrounding the game.