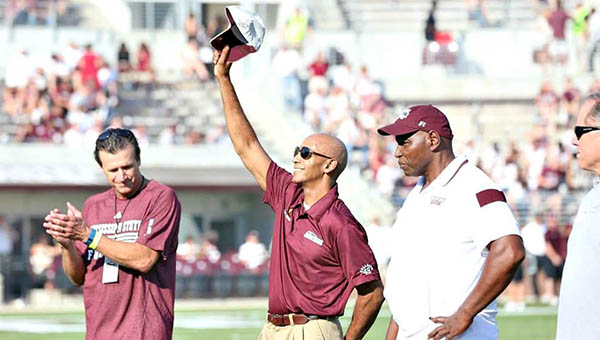 Former Mississippi State and Vicksburg High linebacker Eddie Burns, center, waves to the crowd at Davis-Wade Stadium during a ceremony honoring MSU’s 6-3 win over No. 1 Alabama in 1980. Burns was on that MSU team, and will be inducted to the Vicksburg Warren School District Athletic Hall of Fame Thursday at 6 p.m. at City Auditorium. Tickets to the banquet are $20, and can be purchased at the door. (Submitted to The Vicksburg Post)

For the past week, we’ve been running stories in the sports section profiling the members of this year’s Vicksburg Warren School District Athletic Hall of Fame class.

It’s been fun to learn a little more about the journeys of each of the seven members, what made them successful, and why they deserved to be hall of famers.

All seven are to be commended and congratulated, and there’s still time to support them. The induction banquet is tonight at 6 p.m. at City Auditorium. Tickets are $20 and can be purchased at the door.

Once the Class of 2017 is inducted, however, it’s time to turn an eye toward 2018. As the Hall of Fame enters its third year, there are still some notable omissions to the roster. That’s to be expected when you pick a limited number of people for any endeavor, but it’s still a good time to start thinking about who should be inducted next August:

• Several full classes could be comprised of football players, so narrowing it to two or three per year is difficult. Running backs Brian Darden and Sylvester Stamps should both be in sooner rather than later, however.
Darden was an All-American at Warren Central in the early 1990s and is generally considered the best player to ever come through Warren County. Stamps might had a claim to that title for a while, after becoming Vicksburg High’s all-time rushing leader in the late 70s. Stamps also played six seasons in the NFL.

• Warren Central’s Brian Pettway was the Ferriss Trophy winner at Ole Miss in 2005, the same year his former high school teammate Craig Newton was a finalist for the award given to Mississippi’s top college baseball player. Newton led Delta State to the Division II national championship as its starting catcher in 2004.

• Former Vicksburg High football assistant Bobby Huell was a mainstay in the program for nearly 30 years until his death from cancer in 2015. Warren Central’s Lucy Young was a pioneer in two sports, serving as the boys’ soccer coach and girls softball coach for a couple of decades.

Huell and Young were both mentors to several generations of young people. Young is retired but remains active in the area’s Special Olympics program and other charitable efforts. Both are shining examples of what we want coaches to be.

The VWSD will begin accepting nominations for the Class of 2018 early next year. Hopefully, these names are a good starting point.

Ernest Bowker is a sports writer for The Vicksburg Post. He can be reached at ernest.bowker@vicksburgpost.com