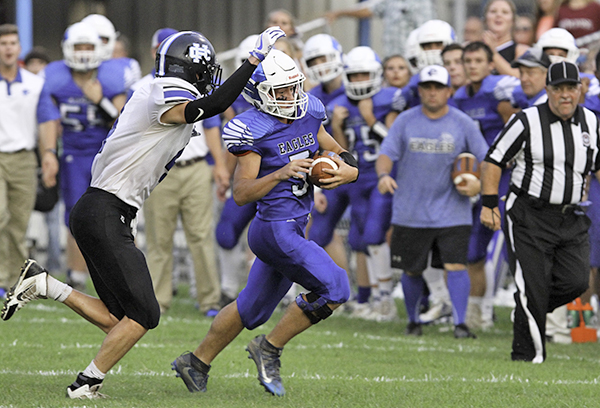 Porter’s Chapel Academy running back Carter White (5) runs with the ball Friday against Hillcrest. White carried the ball 20 times for a team-high 131 yards and a touchdown as the Eagles won 37-6. (Paul Ingram/For The Vicksburg Post)

A change of scheme on offense paid dividends for Porter’s Chapel Academy on Friday.

The Eagles ran the ball 52 times and gained all 339 of their yards on the ground as they ran their way to a 37-6 victory over Hillcrest Christian.

PCA (2-1, 1-1 District 3-AAA) switched to a power-I set on offense and dominated the line of scrimmage, gaining large chucks of yardage up the middle throughout the game.

“We wanted to establish the run and I thought we did that. I thought we ran the ball real well,” PCA head coach Blake Purvis said. “We saw an offense last week that they faced that pretty much did most of the same stuff. We believe we are built on the run game so we wanted to get behind our offensive line and run the ball downhill.”

Senior running back Glen Allen Kittrell served as the bell cow early by rushing 14 times for 108 yards and a touchdown in the first half before going down with a shoulder injury.

Junior Carter White took over from there, carrying the ball 20 times in the game for 131 yards and a touchdown.

“(White) was finding holes. Him and Glen Allen both,” Purvis said. “Before Glen Allen went down, they were finding holes, making good cuts, they were staying behind their blockers. When your offensive line does that, gives you holes, and you stay in there behind them and make cuts you can gain yards.”

On defense, the Eagles dominated from the first whistle after being on their heels from the get-go. PCA was set to receive the opening kickoff, but a squib kick was recovered by Hillcrest (0-3), giving the Cougars the ball at the PCA 35.

The Eagles’ defense held on and forced a stop on fourth down at the 28-yard line following a third down sack by McKinley Skipper.

PCA took advantage of the stop and scored a touchdown on its first possession of the game when Kittrell punched it in from the 5-yard line with 5:05 left in the first quarter.

The Eagles stretched their lead to 10-0 six seconds into the second quarter when kicker Jagger Weekly connected on a 37-yard field goal.

PCA quickly tacked on another score after an interception by Josh Hunt gave it the ball back less than a minute later at the 16 yard-line. Two plays later, quarterback Tristan Pickering ran in for the score from the 5-yard line.

PCA scored for the final time in the first half with 38 seconds left when Brayden Ray scored from the 3-yard line to take a 23-0 lead into halftime.

Hillcrest’s lone score of the night came with 5:06 left in the third quarter when quarterback Max Chandler found his receiver for a 13-yard touchdown pass. The Cougars scored at the end of a more than three-minute drive. The drive was kept alive by 25 yards worth of penalties by the Eagles’ defense in a three-play sequence.

The PCA defense held the Cougars to 47 rushing yards and forced four turnovers — two fumbles and two interceptions. The defense put a stamp on its dominant performance with four seconds left in the third quarter when Baylen Warnock picked off a Hillcrest pass and raced 74 yards for the score to give his team a 37-6 lead.

“Our offense is helped out when our defense puts them in good position and creates turnovers,” Purvis said. “If we can quit turning the ball over on offense, we had some fumbles tonight, if we can shore that up and turn our defensive turnovers into points, it leads to a lot more success for us.”

PCA will host Central Private next Friday at 7 p.m.

Tallulah has won 27 of its last 30 games since joining the MAIS’ eight-man division in 2014.

Collins scored on runs of 5 and 45 yards in the first half as the Trojans built a 12-0 lead at halftime. He added a 34-yard touchdown run in the third quarter, and an 18- and 22-yarder in the fourth, to complete the scoring.
Franklin’s only touchdown came on a 30-yard pass from Colton Williams to Wesley Gwin.

Hunter Fortenberry had four tackles and an interception for Tallulah, which will play Humphreys Academy next Friday.