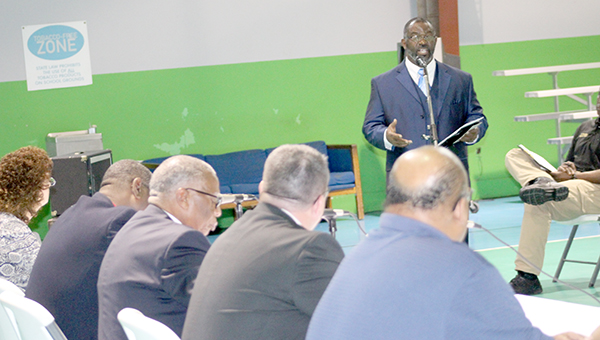 The Rev. Willie P. Taylor, spokesman for the Kings Community Transformation Committee, presents the group's recommendations for spending $1 million for improving the Kings community to the Board of Mayor and Aldermen Thursday night. (John Surratt/The Vicksburg Post)

Entrance and exit signs, landscaping, street lights and sidewalks topped the list of projects for $1 million in capital improvement bond money designated for the Kings community, according to a list presented to the Board of Mayor and Aldermen Thursday by the Kings Community Transformation Committee.

About 20 people, including the city’s division heads, attended the special board meeting at the Kings Empowerment Center.

Mayor George Flaggs Jr. called the report “the most coordinated effort since I have been in Vicksburg as state representative and as a mayor. You’ve come together and given us a road map as to how you want to improve your community.”

He said it will be up to the board to put the recommendations together “and do what we should have been doing all along.”

Flaggs in July announced he was dedicating $1 million of the next $9 million drawn from the city’s $18 million capital improvements bond issue to improve Kings. The citizens commission was formed in late July to discuss possible projects and make a recommendation to the board.

He said the most important thing to the residents was beautification at the entrances to Kings.

“Present some kind of state of the art sign so people would know they’re entering into an honorable and respectable community,” he said. “So they will know Kings is a part of history we take seriously, because there is a lot of respect and history in the Kings Community.”

“We may not be using the correct plants in some areas,” he said. “Some of the plants are obstructing views and take away from the safety of entering Highway (U.S.) 61. Lighting is also very important to the Kings community. We do have some dark areas, so you should consider re-evaluating the lighting.”

He said historical markers are important for the community’s identity.

He said the committee has formed a historical marker committee to examine getting markers for Kings.

“Tourism is the key commodity. It’s the business of the Vicksburg area,” he said. Kings, he added, is an important part of the area’s history and it’s connection to the blues.

“This is a blues portal, (U.S.) 61. How can you skip Kings, the heartbeat of this particular blues medium? We need to advertise our history and bring it to the forefront.”

Another serious need, Taylor said, is sidewalks from the Texaco convenience store at the corner of North Washington and Haining Road almost to Chickasaw.

“This is a walking community; a community that gets out and you’ll find people walking. We need some safety; we need some sidewalks in the area. That’s very important.”

The committee report also indicated the need for a covered pavilion similar to the Mississippi Blues Trail marker pavilion in Marcus Bottom, but large enough for community gatherings and including restrooms, lighting and electrical outlets and ceiling fans; a splash pad with miniature golf; and the addition of Kings to the city’s comprehensive plan for housing and growth.

“Kings was removed from the plan,” Taylor said. “We want to see it put back in.”

The committee also listed six areas they want to see improved in the community:

Taylor said speeding on North Washington is a serious safety hazard, especially with 18-wheelers, who use the street for access to the Port of Vicksburg and other areas.

“They fly through there like it’s the Daytona 500,” he said. “We are badly in need of something to control speed.”

The group also asked for updates on the Kings community park being built in Waltersville.

“Let us look at it for a month to be fair, and we’ll discuss it ourselves.”

He said the board did not anticipate starting to draw from the second $9 million until November or December.

“Before we spend one dollar of the $1million, we’re coming back here to give you a budget outline as to what we’re doing,” he said.

Some of the issues the committee highlighted in its report, he said, were already being done.

“Some of the things (like cleaning the drainage ditches and collecting litter) should be routine maintenance anyway, they shouldn’t have to do with capital improvements. We ought to be doing it, and we should have been doing it anyway.

“I apologize to Kings for my first four years, but I won’t apologize again, because I’m going to get it done,” Flaggs said.