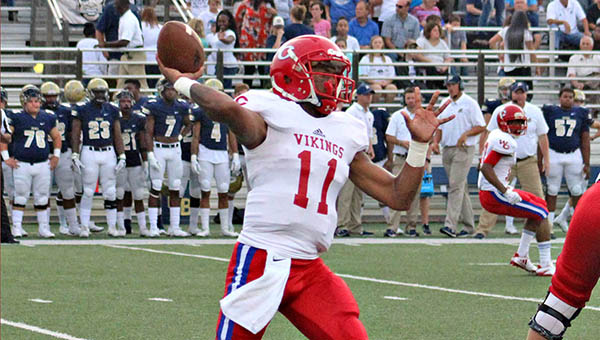 For Warren County’s football fans, the annual game between Vicksburg and Warren Central is a must-see, circle it on the calendar attraction.

Warren Central’s players, however, insist it’s just another game to them.

Part of that might stem from the idea preached by coaches of taking things one week at a time and keeping an even keel. It might also be that the Vikings have been so dominant in the series in recent years that there just hasn’t been that much for them to get riled up about.

Warren Central has won five consecutive games over its crosstown rival. Its current seniors have never lost to the Gators on the varsity level, and there have been a couple of lopsided shutouts mixed into the current streak.
So while local bragging rights and school pride are on the line, this year’s Vikings seem more focused on getting back on the winning track following last week’s loss to Pearl than the accolades that come from winning a big rivalry game.

“We treat every game the same and we don’t try to single anybody out. It is a rival game. It’s going to be intense. This game could go either way. But we’re going to prepare and get ready to play,” WC senior defensive end Damonte Stamps said.

Warren Central’s winning streak in the series began in 2012, when Vicksburg forfeited the game following an on-field brawl the week before against Murrah. Most of the VHS roster was suspended by the Mississippi High School Activities Association and there weren’t enough players available to play.

The forfeit snapped a five-game Vicksburg winning streak that had seemed to turn the tide in a series once dominated by Warren Central. The Vikings won 20 of the first 21 meetings between the teams, and then VHS won six of seven from 2005-11.

Warren Central, however, has ascended back to contender status in Class 6A over the past five years and regained control of the rivalry series as well. It posted back-to-back shutouts against the Gators in 2014 and 2015, and then won 42-21 at Memorial Stadium last year.

It’s the idea of being a championship contender, however, that WC coach Josh Morgan said is driving the team these days. Beating Vicksburg is a goal, but only one of many that the team puts on its board for the season.

“I think that has a lot to do with confidence,” Morgan said. “These kids don’t care about who won the last five years or 30 years ago. They want to win it right now. In this area, this game will always be appealing and a big thing.”

Beyond the rivalry, this week’s game is also a pivotal one in the course of both teams’ seasons.
Warren Central took its first loss last week, 28-21 to No. 1 Pearl, and would like to get back in the win column before facing perennial Louisiana power Neville next week and then beginning the Region 2-6A schedule after that.

Vicksburg is 0-2, with losses to Oxford and Clinton on the resumé.

A 1-2 record has vastly different meanings to each team, but what both have in common is that they need a win to get back to where they feel they should be in terms of momentum.

“They’re going to come out full of energy. They’re 0-2, so if they beat us it can change their whole season,” Warren Central quarterback F.J. Barnum said.

“It’s a big game. You never want to start off the season 1-2, negative like that. So we want to do everything we can to win the game,” Stamps said.

While the Vikings were disappointed at last week’s missed opportunity at a signature victory, Morgan said there were some positive takeaways from it. He called it a great learning tool for a team still breaking in 18 new starters, in the way the team both lost the game — by letting an early 21-7 lead get away — and in hanging tough against a quality team on the road.

“I think we got better from Week 1 to Week 2, even though we lost. It was a big opportunity we let slip through our fingers. But if it makes us better, that loss last Friday will be well worth it,” Morgan said. “One good thing about that, was that everything was against us. We were on the road, we had some calls and some plays that didn’t go our way, and we fought through it. For you to be great you have to see that kind of stuff, and the earlier the better. So the experience factor is going to pay big dividends down the road.”