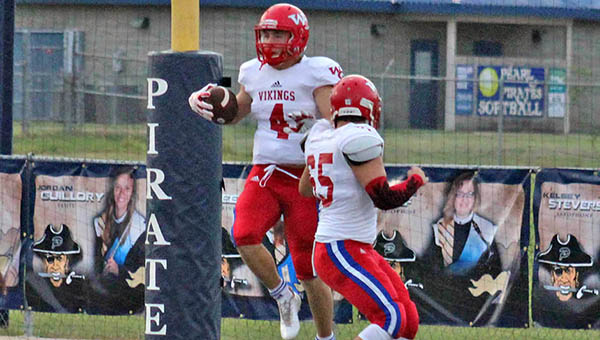 Warren Central defensive back Walt Hopson (4) celebrates with teammate Zane McRaney (65) after returning an interception for a touchdown last week against Pearl. It was Warren Central’s third defensive touchdown of the season. (Ernest Bowker/The Vicksburg Post)

Two years ago, Warren Central keyed its run to a 10-win season by turning defense into offense and converting turnovers into touchdowns.

After a year where the offense carried the scoring load, the defense is up to its old tricks.

Warren Central has scored three defensive touchdowns in its first two games, nearly matching its offensive output and providing another dimension to a team hoping to make a run toward a Class 6A championship this season.

“We go into games and the first thing we think about is scoring on defense,” senior defensive end Damonte Stamps said. “We try to force turnovers and help our offense as much as we can. That’s the kind of defense we are. We think we ought to be able to do a lot of things to help our offense.”

Warren Central scored twice on defense in a 28-3 win over Clarksdale in the Red Carpet Bowl two weeks ago. Fumble returns by Lamar Gray and Corey Wilson Jr. broke open a game that was scoreless at halftime. A long kickoff return by Mason Quimby set WC up with a first-and-goal situation and led to another touchdown.

Last week, Walt Hopson returned an interception 23 yards for a score on Pearl’s first possession. Pearl went on to win the game 28-21, but Hopson’s pick-six spurred the Vikings to a fast start and a 21-7 lead at the end of the first quarter.

Quarterback F.J. Barnum, a senior who is in his first year as the varsity starter, said having the defense put points on the board takes pressure off of him. Barnum is 30-of-55 passing so far this season, for 290 yards and two touchdowns. He has not yet thrown an interception.

“The first drive (against Pearl) we didn’t get any points, and then they came right back and got a turnover and after that we scored two drives back-to-back. So it was a big boost,” Barnum said.

Turning turnovers into touchdowns is nothing new for Warren Central. In 2015 it scored eight times on defense or special teams. Last season it scored three. WC coach Josh Morgan said taking an interception or fumble back to the end zone is an idea coaches try to teach and instill in players.

“It’s one of the things we work on a whole lot. Our guys are well prepared for it. Any time you can score on defense it helps you,” Morgan said. “We want to not just be fast and physical, we want turnovers and scoring on our mind.”

“It’s a fun thing to do, because everybody’s happy and celebrating,” Stamps said. “We did what we said we were going to do. We’re just happy we’re able to do something like that.”