Alcorn rolls up Miles in opener 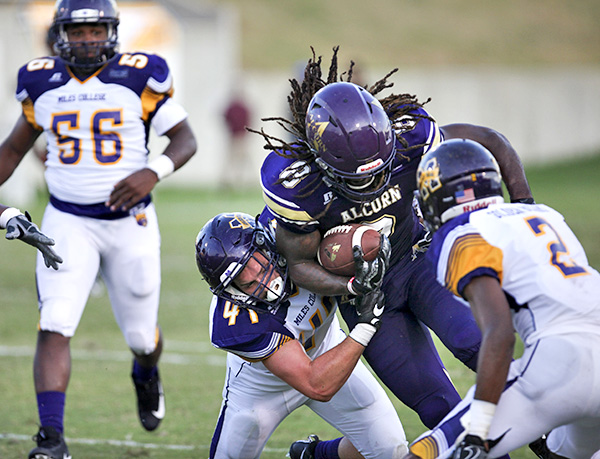 LORMAN — Alcorn State put the pedal to the metal Saturday, and put Miles behind it.

Lenorris Footman completed 21 of 28 passes for 241 yards and a touchdown, and ran for 92 yards and two more touchdowns, as the Braves beat Miles College 50-21 in their season opener at Jack Spinks-Marino Casem Stadium.

Footman was one of three Alcorn players to finish with 90 yards or more on the ground. De’Lance Turner led the way with 128 yards and a touchdown, while P.J. Simmons had 95 yards and a score.

Turner also caught a 20-yard touchdown pass in the second quarter that helped Alcorn start to pull away. The play gave the Braves a 24-7 lead at halftime, and then he had an 88-yard TD run early in the third quarter to make it 31-14.

Footman had thrown an interception on the first play of the second half that was returned 42 yards for a touchdown by N’Ktavious Floyd.

Marquis Warford also returned a punt for a touchdown for Alcorn, which won its home opener for the fifth year in a row.