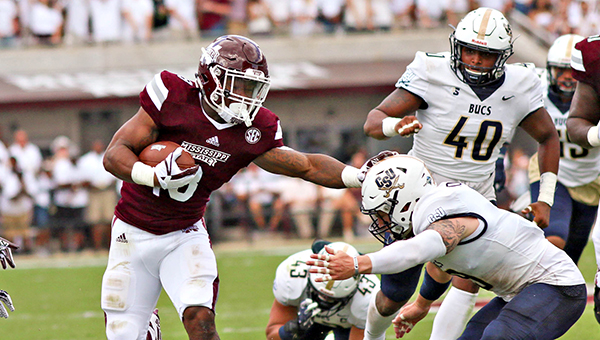 STARKVILLE (AP) — In their opening game of the year, Dan Mullen’s Mississippi State team needed to clear the deck. Last year’s campaign was plagued by injuries and inconsistencies on both sides of the ball, and the team squeaked into a bowl game with a losing record. If 2017 is to be any different, the Bulldogs needed to set the tone in Week One.

Nick Fitzgerald threw two touchdown passes and ran for another score to lead Mississippi State to a 49-0 victory over Charleston Southern on Saturday in the season opener for both teams.
Mississippi State racked up 555 yards of offense with 29 first downs, and almost a 50-50 split on rushing and passing yards.

Such offensive chutzpah was to be expected from a Mullen team, but the bigger surprise for Mississippi State was its defensive dominance.

“They played to our identity,” first year defensive coordinator Todd Grantham said. “We attacked guys and understood what we needed to do from a game plan standpoint.”

Charleston Southern mustered only 33 total yards and two first downs against an MSU defense that allowed an average of 459 yards per game last season.

“That’s the type of defense I expect,” Mullen said. “We had 11 guys running to the ball even with a couple minutes left in the game. We’ve not had that here.”

Tougher competition looms — the Southeastern Conference opener against LSU is only two weeks away — but with nine tackles for a loss, one sack and two safeties, the Bulldog unit carried the day.

“We’ve got a rhythm now,” said defensive lineman Jeffery Simmons, who had five tackles and a sack. “Whatever the next team does best, we’ll take that away too.”

Mississippi State controlled the game from the opening kickoff, scoring 23 points and holding the Buccaneers to 15 yards of total offense in the first quarter.

Fitzgerald scored on a 2-yard run on the game’s opening drive and then threw an 8-yard TD pass to Gabe Myles with 3:35 left.

“I don’t want to be glib,” CSU coach Mark Tucker said, “but we probably set a school record today for most points in a game.”

The Bulldogs led 35-0 at halftime and cruised in the second half.

“It’s an FCS team, sure, but we came out and played today,” Mullen said. “Maybe it’s not a surprising result, but they can be. Other teams have been surprised.”

Fitzgerald was 16-for-29 for 239 yards, throwing touchdown passes to Myles and Deddrick Thomas. Aeris Williams led all rushers with 83 yards and a touchdown. Dontavian Lee also rushed for a touchdown.

The Bulldogs avoided dropping a second straight opener and looked like a contender in the SEC West. Last year’s opening day loss to South Alabama underscored how much they missed Dak Prescott, but Fitzgerald has matured a lot since then.

“Last year it was a big deflation, a big letdown,” Fitzgerald said. “This gives us confidence to get in there with the film this week and get even better.”