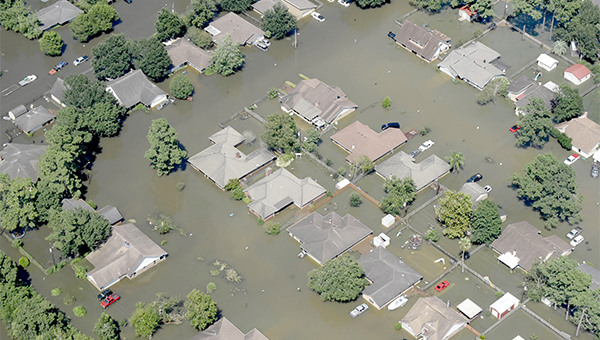 HISTORIC FLOOD: Flooding in neighborhoods such as this one in Orange, Texas, has been massive. ERDC in Vicksburg has been developing models and maps showing the extent and effect Hurricane Harvey has had on the south Texas area since it made landfall on Aug. 25. (Courtland Wells | Vicksburg Post)

When Aaron Byrd looks at the computer screen in his office at the U.S. Army’s Engineer Research and Development Center’s Coastal Hydraulics Laboratory, he sees a map covered in multiple colors of red, black, green and blue.

The map is the city of Houston, Texas, showing the extent of the flooding from Hurricane Harvey’s rains that inundated the city over four days. The colors represent the depths of the water in various areas of the city.

Since Hurricane Harvey hit the Texas Gulf Coast Aug. 25, Byrd, a research civil engineer/modeler at ERDC, and his team, along with engineers with the U.S. Army Corps of Engineers Vicksburg District, have been developing models and maps showing the extent and effect of the storm’s surge and rainfall on coastal communities in the storm’s path.

“We have several models; we’re one of many departments in the Corps of Engineers trying to help out,” he said.

“We started last Friday with a call needing information; we started standing up models as quick as we could for Corpus Christi, San Antonio, the Houston area, and we’ve been going nonstop ever since.

“The folks at the Vicksburg District have also been working tirelessly to provide similar flood maps to the USACE Operation Center. Robert Simrall has been leading up that team and they have also been instrumental in the flood fight.”

Byrd’s team used information from storm surge models and rainfall predictions to predict where inland flooding would occur. The rainfall projections, he said, came from the National Weather Service and several different sources.

“We’ve been working on developing a lot of tools over a few decades to help us pull together all these huge data sets that help us go into modeling these areas,” he said. “We start to pull up our tools and start plugging in elevation data, rainfall data, land cover data and talk to other modelers who are running storm surge models.

“Then we start to look at what’s on the ground; what are the main features that are going to control the flooding, what flood control methods are built in place, and we start to assemble all those things to understand the big picture — what are all the pieces of the puzzle that influence the flooding and the watershed response to the flooding.”

Once that information is compiled and the models to simulate flooding are developed, he said, the information is run through ERDC’s two supercomputers.

“We can make them run them (the models) much faster than at our little work areas and we can do much bigger areas than we can do on our work stations,” Byrd said.

Much of predicting flooding, Byrd said, depends on typography, or the lay of the land.

“The local topography of an area is going to determine a lot about flooding. If it’s steep land, it’s going to drain off quickly. If it’s flat land like Houston, it doesn’t run off (quickly), because it can’t move very fast.”

There are also areas upstream from the flooding. In the case of Houston, Byrd said, the city has two large reservoirs to trap water coming into the city, and the Houston Ship Channel — a channel from the Port of Houston to the Gulf of Mexico that allows large ocean-going ships access to the port.

And while Houston is not directly attached to the coast, he said, the ship channel does get some storm surge that comes up from the bay.

“That can actually back up water into the area as well, but it also makes water there have a harder time to leave. So in Houston, you get a kind of confluence of lots of water coming in, and it all has to go out slowly through one little area, so you get a lot of flooding.”

He said the maps, which show the best estimates where the flooding is and the depth, are sent to the Corps’ emergency operations center.

That means providing all the information available from the maps the Corps of Engineers Operations Center and first responders so they will know what is going on and what they need to be aware of in their area.

“Whatever information they have is what they base their decision on, so the more information we can give them the better,” Byrd said.

He said the models also make use of Google Earth, an online mapping system.

“The nice thing about Google Earth is we can get this to people and they can use their maps in their own products to figure out which houses are being flooded or which road (is flooded),” Byrd said.

“We put our data in a way so Google Earth can look at it and pull it in and other people can pull it in.”

Presently, he said, the Corps is coordinating efforts with the Federal Emergency Management Agency and Homeland Security to coordinate not only what is happening at the local level, but also what’s involved in the larger picture of the event.

“Right now, they’re evacuating people; getting them out.”

The next step is the recovery, where people try to get their lives back together, and the maps will also assist with that.

Byrd said the models developed by his team “are special models so we can show what happens where. We model the whole thing; the water moving through the whole system on a time scale. Our models take a few hours to run, but when we’re done, we can say, ‘Here’s what’s going to happen for the next 3, 4, 5, days.’

“We can show the pattern of what should happen.”

He said the models are able to help emergency management agencies to better prepare in advance of as storm, pointing out that models for Super Storm Sandy enabled New York officials to mobilize their emergency operations well in advance of the storm.

“Harvey was a little more challenging, because the day before it hit, it looked like it was not much of a storm, so we didn’t get the call to jump and do much, but it changed pretty quick and we had to scramble.

“To set up the models and get the models running takes a good bit of time and effort. We got the call about the rainfall in Houston, and started modeling and getting data. By Monday, we had figured the amount of rainfall and where the flooding would be.”

Byrd said his modeling teams have spent years improving the models and making them easier to use.

“These models are used everywhere in the world so we have to make them easier to use.”

He said the team is still preparing models for the effects of Harvey.