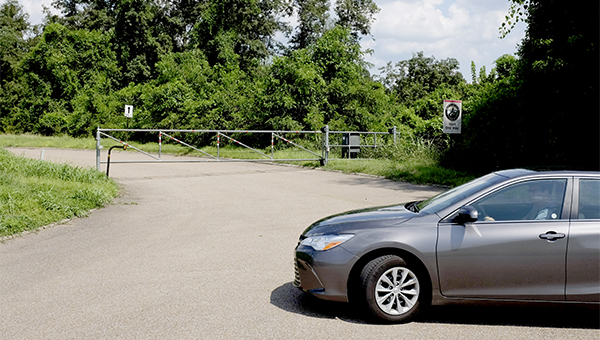 A vehicle turns around at the closed gate at Fort Hill preventing passage along Confederate Avenue inside of the Vicksburg National Military Park due to erosion under the roadway leaving it unstable for travel Saturday. (Courtland Wells/The Vicksburg Post)

The Vicksburg National Military Park announced Friday that Confederate Avenue from Ft. Hill to Graveyard Road within the park will be closed effectively immediately.

According to a release, the road was closed to all traffic after the road was left in an unstable and dangerous condition after a large section of soil eroded under the roadbed. The soil erosion was due to the recent heavy rains in Vicksburg.

The Vicksburg Wastewater treatment plant measured 17.15 inches of rain in the month of August, which was more than a foot above the average rainfall for August of 3.65 inches.

So far this year, Vicksburg has received 54.37 inches of rain whereas the average rainfall at this point is only 36.57 inches.

Ft. Hill within the military park is still accessible, and the section of Confederate Avenue from Graveyard Road to the south remains open. All other park roads remain open.

According to the release, the National Park Service is assessing the situation, and is attempting to identify ways to minimize visitor impacts while providing for public safety as repairs are completed.

For additional information about the road closure, the military park can be reached at 601-636-0583.