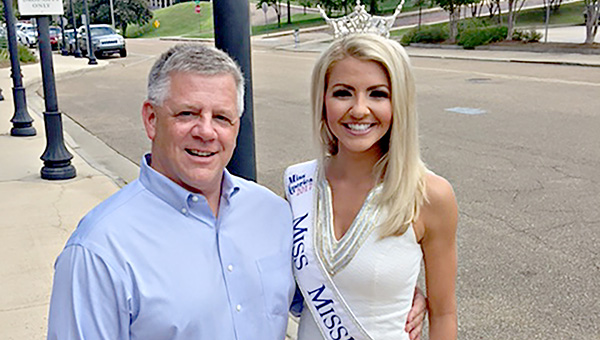 PROUD OF VICKSBURG’S MISS MISSISSIPPI: Rowdy Nosser stands with Miss Mississippi, Vicksburg’s own Anne Elizabeth Buys, following the Vicksburg-Warren County Chamber luncheon on Aug. 16, two days before suffering a stroke that would ultimately take his life. Nosser was one of Buys’ most ardent supporters and was certain she will be the next Miss America. Buys will represent Mississippi in the Miss America pageant on Sept. 10. (Submitted/The Vicksburg Post)

Rowdy Nosser was “all in” when it came to Vicksburg.

That’s the consensus of his friends and community leaders, reacting to Nosser’s untimely death on Sunday afternoon.

Nosser, 55, beloved owner of Rowdy’s and Taco Casa restaurants in Vicksburg, suffered a stroke on the evening of Aug. 18. He was taken to the emergency room at Merit Health River Region and soon after airlifted to University of Mississippi Medical Center in Jackson, where he underwent emergency brain surgery.

Nosser didn’t regain consciousness and died Sunday afternoon, surrounded by his family, who kept a 24-hour vigil at his bedside.

“Rowdy was such a good advocate for Vicksburg. He was all in when it came to Vicksburg,” said Mark Buys, president of the Vicksburg Division of BancorpSouth, and a longtime friend of Nosser’s.

“Rowdy has been one of my better friends for years. As we began our corporate lives and, over time, I became his banker. We’ve been in that role together for many years. I consulted with him on numerous projects and ideas and knew him quite well, inside and out,” Buys said. “Rowdy took an interest in the youth of our community and did lots of things for athletic teams and young people here that people didn’t know about. He loved each of my children. This is a difficult loss for my whole family.”

Nosser was an avid supporter of each of the Buys children, all athletes, but was head cheerleader when it came to his support for Anne Elizabeth Buys, Miss Mississippi, who will compete in the Miss America pageant on Sept. 10.

“He already told me she is going to be Miss America,” Buys said.

He was at a private event Nosser hosted on Aug. 18 for watching the television show “State Plate,” which featured Rowdy’s Mississippi Mud Pies.

“He came out and thanked us for being there and told us how much love he felt in the room. Then he slipped away and went to the hospital,” Buys said. “That man loved Vicksburg. He didn’t know why some people didn’t choose to live here. He thought people who didn’t live here missed the benefit of living in a city that shows such great support for everyone and a city that has such historical significance.”

Buys said Nosser companies were honored with the most outstanding small business award this year from the Vicksburg-Warren County Chamber of Commerce.

“That award was so well deserved for his support for the community,” he said “Rowdy had such a great personality. He was a joy to be around. He never had a bad day.”

“I’ve known Rowdy my entire life. I don’t know another man out there that’s got a bigger, better, more loving, more giving heart than Rowdy Nosser,” Fordice said. “He was fun-loving and happy go lucky. He was such a great man. He loved his boys and loved his family. Rowdy always made you laugh. I loved his little saying, his quips, his Rowdyisms.

“Rowdy was born and raised in Vicksburg and absolutely loved this community and the people in it. He would do anything for anybody. I counted him as one of my very closest friends and I’m absolutely heartbroken,” Fordice said.

“My heart goes out to his family and on behalf of the citizens of Vicksburg, we send them our prayers,” Flaggs said.

“If anybody was a part of this community, certainly Rowdy Nosser was. His daddy was an entrepreneur here and Rowdy followed in his footsteps. He has been an integral part of this community from supporting education to being a civil leader and a business leader — everything. He will forever be missed in Vicksburg. His generosity was beyond measure.”

Flaggs said he and Nosser worked out at the YMCA here for more than 20 years. “I had to walk back out of the Y this morning and regroup,” Flaggs said.

“We worked out for years at the old YMCA and then the new YMCA. The last thing Rowdy told me was he wanted Anne Elizabeth to win Miss America and wanted to see the sports complex built. And tomorrow (today) we will be voting on a resolution to borrow $30 million to build the sport complex.”