Gators looking to fix second half woes during bye 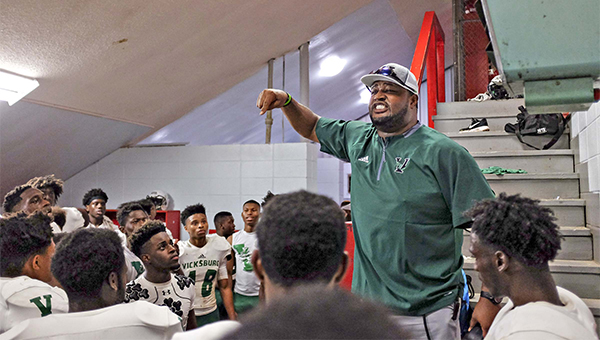 For the third week in a row, the Vicksburg Gators went into halftime feeling pretty good about the way things were going.

The offense scored a touchdown on the opening drive to give them their first lead of the season. The defense had held Warren Central to only 85 yards and seven points, and the 7-7 tie on the scoreboard promised a game that would go down to the wire.

Then, however, the Gators ran into the one obstacle they can’t seem to clear this season — the start of the third quarter.

Warren Central scored on its first four possessions of the second half and went on to beat the Gators 35-7. It marked the second time in three games in which the Gators have been shut out in the second half, and sent them to their first 0-3 start since 2012.

It’s a troubling trend they’ll try to solve as they head into their bye week.

“We’ve just got to regroup. Keep doing the things that we do. We simulated a halftime this week in practice. Things like that, to get the guys re-energized. We’re going to find the equation, whatever it is, to figure things out,” Vicksburg coach Lorenzo Breland said.

The Gators have played well in the first half of their three losses to Class 6A contenders Oxford, Clinton and Warren Central. They forced three turnovers against Clinton, and held both Oxford and Warren Central to less than 100 yards of offense. All three opponents scored a single first-half touchdown.

Starting with the second-half kickoff, though, is where things have gone sideways.

All three of VHS’ opponents have received the second-half kickoff and scored. That first score has begun second-half slides that buried the Gators each time.

In the first half this season, the Gators have been outscored 21-13. In the second half, the margin is 70-7.

Breland said a lack of depth is at least partly to blame for the difference from the first half to the second. The Gators’ offensive line has struggled this season, and to help patch it up Breland has been moving players in and out — including a couple of his top defensive stars. Lineman Michael Sullivan saw time on the offensive line against Warren Central, and linebacker Nick Anderson was occasionally lined up at fullback and tight end. Anderson even caught a touchdown pass against Warren Central.

While it might pay dividends eventually, the short-term effect is either to wear out a defense that has been effective by using its players on both sides of the ball, or by forcing it to return to the field faster than they’d like because of the offensive struggles.

“That’s definitely the issue. We’ve got a good, strong group of seniors, but depth definitely is the key,” Breland said. “We’ve got to get some of those guys ready.”

The Gators have also shown a propensity for giving up big plays, or allowing teams to capitalize on mistakes. Against both Oxford and Warren Central, bobbled punt snaps gave an opponent the ball inside the 30-yard line and led to touchdowns.

Warren Central connected on a 49-yard touchdown pass to go up 21-7, and the week before Clinton scored on a 40-yard pass and set up another short drive with a punt return inside the 10-yard line.

Of all the problems the Gators have had so far, Breland said those were the easiest to fix.

“It wasn’t like they marched it all the way down the field,” he said after the loss to Warren Central. “All of that is fixable and correctable, and that’s just what we’ve got to do.”

The Gators will have an extra week to do it. They’re off this Friday night before heading to Columbus next week. It’s the fourth consecutive Class 6A opponent that they’ll face, but the first time they’ll have to travel outside of Warren County. Two of the first three games — last week’s rivalry game with the Vikings and the season-opening Red Carpet Bowl vs. Oxford — were played at Warren Central.

Breland said the bye is coming at a good time to allow the team to fix its flaws before facing Columbus and then Germantown in the Region 2-5A opener on Sept. 22.

“We would have liked to go into the bye with a win, but this definitely gives us time to regroup,” Breland said.