Newfound depth has Eagles off to best start in five years 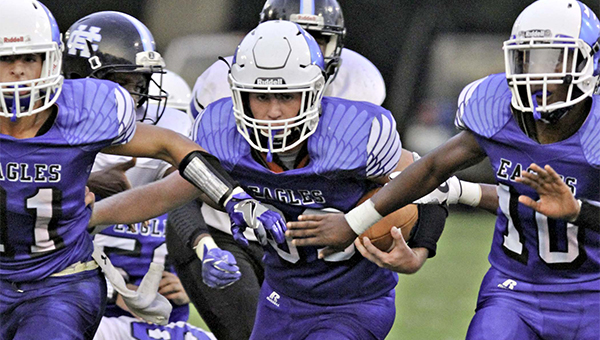 The Porter’s Chapel Academy Eagles ran their way to a 37-6 victory over Hillcrest Christian last Friday, giving them their second win of the season and their best start since 2012.

The Eagles’ victory Friday night was their second of the season in only their third game matching the 2012 season when they defeated Union Christian and Ben’s Ford early in the season before finishing with a 4-8 record.

The win over the Cougars enabled the Eagles to surpass their combined win total for the last two seasons, when they went 0-10 and 1-9, and has breathed life into a program that has struggled for most of this decade.

The Eagles, who have already surpassed their point total of 61 from last year, have found multiple ways to score throughout the season and found success on the ground and through the air.

In their first game against Columbus Christian, PCA was led by running back Glenn Alan Kittrell, who rushed for 111 yards and two touchdowns, as the team ran for a total of 255 yards and won 48-0.

With the run game stymied by a strong Riverfield defensive line in week 2, the Eagles turned to quarterback Tristan Pickering and their passing attack. PCA fell behind 32-0 before battling back to lose 39-21 as Pickering completed 11-of-22 passes for 294 yards and two touchdowns. It was the best passing game by a PCA quarterback since Jonah Masterson threw for 305 yards against Russell Christian in September 2013.

In week 3, it was back to the ground game as the Eagles gained every one of their 339 offensive yards on the ground. Kittrell rushed for 108 yards and a touchdown in the first half before suffering a shoulder injury. Junior Carter White carried the load for the rest of the game and finished with 20 carries for 131 yards and a touchdown.

White also had 50 yards and two touchdowns on only 10 carries in the opener against Columbus Christian.

“We are much better up front,” PCA coach Blake Purvis said. “We’ve got a run game, we are developing our pass game and doing some things to help open up our run game.”

The key to this season’s turnaround has been newfound depth on the roster. After losing seven starters in the three weeks before the start of the 2016 season, the Eagles feature a deep senior-laden roster this season.

The depth gives them three players that can be counted on to run the ball in Kittrell, White and Tyrese Craft, as well as an eight-man rotation on the defensive line. The depth in the backfield paid dividends against Hillcrest after Kittrell was injured, and the defensive line stayed fresh and dominated the line of scrimmage throughout the night.

“We’ve got depth. Depth on both sides of the ball and keeping fresh bodies is huge,” Purvis said.

The Eagles will look to pick up their third win of the season when they host Central Private from Baker, La. in a non-district game Friday.