Workers in public service are there to help even on holidays 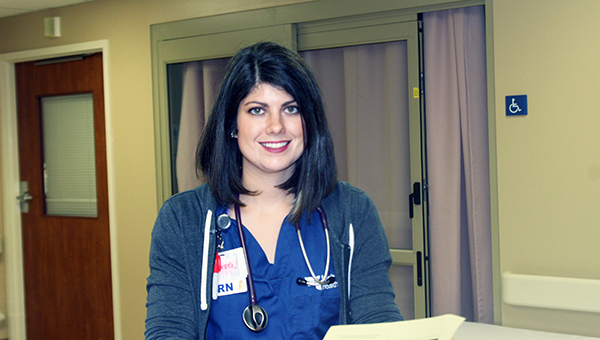 ON CALL: Lauren Roher, an emergency nurse at Merit Health River Region, is one of the many people in Vicksburg and Warren County who will be working on Labor Day. (John Surratt/The Vicksburg Post)

For more than 100 years, people in the United States have been observing Labor Day, a time set aside to honor the contributions of the country’s labor force to the nation.

It’s a holiday time marked by barbeques, picnics and family gatherings, and seen by many as the official end of summer. And for most people, it means a day off from work to rest and spend time with family and friends. But for many others, especially people in public safety and the medical profession, it’s just another day at the office.

“Labor day is supposed to be a day people celebrate at home, but nursing is one of the fields you don’t get to be home celebrating the holiday, along with firefighters and police and many other jobs,” said Lauren Roher, an emergency room nurse at Merit Health River Region, who’s working Labor Day.

Her sentiments are echoed by Warren County sheriff’s deputy Lt. Billy Heggins.
“The employees in administrative and in records may have the day off,” he said, “but for people in patrol, it’s another work day.”

Most of the time, she said, who works the holiday depends on the schedule for that period. Other people, she said, have set schedules, and others will volunteer to work certain periods. Otherwise, it’s the luck of the draw.

Each member of the staff working the holiday brings a covered dish she said, to help lessen the fact they’re working that day.

“We try to make it fun, whether it’s the Fourth of July or Christmas,” she said. “We sit down and have a good eating time if we have a chance.”

“You would think the holidays would be quiet; that people would want to be home and enjoy their holiday, but that’s where a lot of your problems come in,” Roher said. “Instead of being a quiet holiday in here, it’s usually chaotic or can be. You’ll have the first half of the day to where it’s eerie quiet, and then everybody starts trickling in, and then your whole ER is full.”

Usually, she said, the Labor Day medical problems start coming in the afternoon, after the barbeques and the picnics start winding down and other activities begin.

She said the majority of the problems coming to the emergency room on Labor Day are abdominal pains and chest pains, and a lot of injuries from boating and from people who just enjoyed their Labor Day a bit too much.

Roher said 50 percent of the emergency room patients she sees have abdominal pains, running the range from the old-fashioned bellyache to nausea, indigestions and heartburn, “Everything that comes from that good family cookout observing the end of summer — and beverages.”

The chest pains sometime come from family dramas that can be prevalent during the holidays.

And the mix of people with problems coming to the emergency room is about even between adults and children.

“Kids are very accident prone, as well as adults who have been imbibing,” she said.

For law enforcement officers like Heggins and Vicksburg police Lt. Leonce Young, the holiday means time on the road with other officers watching for traffic violations and responding to disturbance complaints.

“All holidays, I would say, are very important to law enforcement,” Young said. “Those are times when families get together. Alcohol plays a key role in it, and you’ll have certain people who can’t get along well. That’s when we have more calls on confrontations with families during the holidays.”

Police officers and deputies are out in force during the holidays.

Young said the police department participates in the national “Drive Sober or Get Pulled Over” campaign and have rolling roadblocks.

Heggins and Young said the majority of Labor Day calls deputies respond to are disturbance calls.

“They usually involve loud noise or music,” Heggins said. “You’ll have a barbeque, there’s alcohol, and after a while, you’ll have that one person who gets out of control and gets loud and people want him to leave, or you’ll have neighbors calling and complaining about someone making too much noise.

“We get very few domestic calls,” he said.

Unlike the major holidays like Christmas and New Years, when people will prepare food and take it the police station and sheriff’s office to provide the officers on duty with a little holiday cheer, officers on holidays the Fourth of July and Labor Day usually find themselves either running through a drive through or stopping at a restaurant to eat.

But if a deputy’s family is having a cookout at home, Heggins said, they will stop by there to enjoy a meal and spend time with their family.

“Law enforcement,” he said, “never stops during the holidays.”

Neither does it stop for firefighters.

“We’re here, 24 hours a day,” said fire department battalion chief Tim Love said. “We work 24 hours on and 48 off, and we come to work regardless of the day.”

“To me, it’s (Labor Day) just another day,” said Lt. Vincent McRaven, who is at the fire department’s Station No. 2.

The firefighters do the jobs they normally would do any other day of the week, Love said.