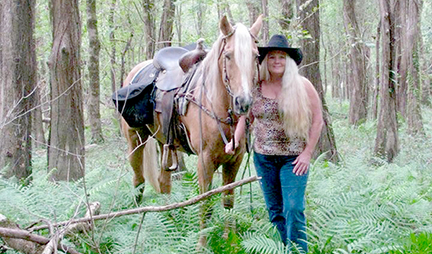 TRAGIC ACCIDENT: Rebecca Rogers and her horse, Trigger. She was killed in an accident involving the horse over the weekend.

An Edwards woman, described as a lover and expert with horses who had a special relationship with the animals, died Sunday in a riding accident in Edwards.

Georgia Lynn, executive director of the Vicksburg-Warren Humane Society, said Rebecca Rogers, who served as a volunteer at the Humane Society, died when she and her horse fell down a ravine while riding with family.

She said the Humane Society will be closed Thursday so the staff can attend Rogers’ funeral in Clinton. Wright and Ferguson Funeral Home in Clinton has charge of arrangements.

Lynn said Rogers had been helping her since 2003. Rogers, she said, “did everything her way. She was always ready to help; she never said, ‘No.’ She was the only person I’ve ever met, who when she smiled, her eyes literally twinkled.”

Lynn said Rogers was at a family gathering in Edwards Sunday when she and a group prepared to go riding about 6 that evening.

“They were trying to find a place to cross on the Big Black River, and Rebecca rode ahead and tried to find a spot,” she said. “With all the rain we had, all we can figure is the ground gave way, and she and her favorite horse, Trigger, fell down into a 10-12 foot ravine.”

The horse, she said, fell on top of Rogers.

“She was doing what she loved best,” she said. She said one of the last things Rogers did was yell back at the riding party, “Don’t come this way.”

She said there were times when Humane Society workers would struggle to load a neglected horse in a trailer and Rogers would tell it, “I’m not going to let you get hurt.”

“She looked out for everybody. She had a heart of gold.”

Lynn recalled when her horse Cherokee died, Rogers was by her side to console her and make sure the horse was buried properly.

“She was such a good friend of the Humane Society; she loved animals. She helped people across the state. She was a big part of the horse world.”

Robin Greer, a friend of Rogers, said she met her at the Madison Parish Riding Club in Tallulah, La.

“She was the type person, that when she entered a room, the room shrank because she was there,” Greer said. “She had a good personality and would help anybody at any time. She did a lot of work with the Humane Society and anyone who needed help with horses. She was the one to go to.”

She said Rogers worked with 4-H, taught riding and held a horse camp for youth in the summer.

“As far as the horse world in Warren County, they lost a big-hearted person. Her loss has left a hole in everybody’s heart.”