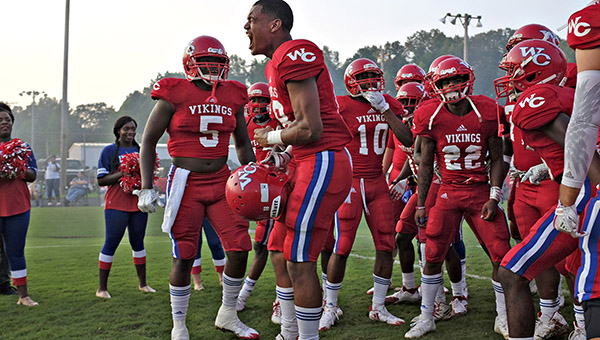 Warren Central's football team gets pumped up before the start of last week’s game against Vicksburg. Warren Central won, 35-7, and moved up two spots to No. 7 in this week’s Mississippi AP poll. (Courtland Wells/The Vicksburg Post)

The Vikings moved up to No. 7 in the overall Top 10, in a three-way tie with Starkville and Brandon. All three teams received 26 points in voting by the state’s media. The Vikings are also No. 7 in Class 6A, with seven points.

A first-place vote in each poll is worth 10 points, through six points for a fifth-place vote.

West Point, which routed Starkville 28-3 last week, took over the top spot in the overall poll. The Green Wave earned six of 10 first-place votes and 94 points to move up from No. 2. They are also No. 1 in the Class 5A poll.
Pearl (3-0) remained undefeated by beating Northwest Rankin 17-7 but lost its No. 1 ranking. It is No. 2 overall this week, with 91 points and four first-place votes. The Pirates also received eight of 10 first-place votes in the Class 6A poll — Tupelo got the other two — to maintain its spot atop those rankings.

Tupelo is No. 3 in the overall poll, and is followed by Oak Grove, Madison Central, Hattiesburg, Warren Central, Starkville, Brandon and Poplarville.

The top five in Class 6A is Pearl, Tupelo, Oak Grove, Madison Central and Starkville. Brandon is at No. 6, with 18 points, Warren Central is seventh and Hancock eighth.

West Point (3-0) received nine of the 10 first-place votes in Class 5A, with No. 5 Cleveland Central picking up the other. Hattiesburg is ranked second, followed by Olive Branch and Picayune.

The No. 1 teams in the other classes are Poplarville in Class 4A, Hazlehurst in 3A, Philadelphia in 2A and Hollandale Simmons in 1A.

Defending Class AAAA champion Jackson Prep is the only unanimous No. 1 in any of the polls, after taking the honor in the MAIS rankings.