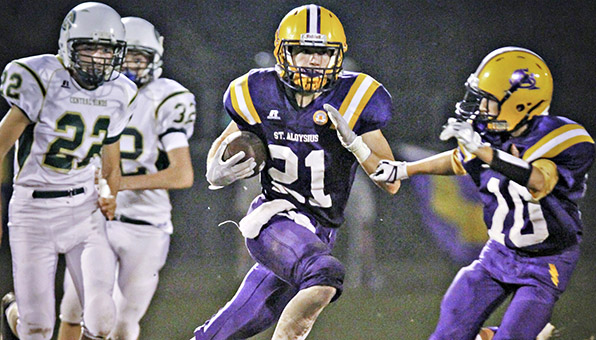 Being 0-3 in high school football is a bit like falling into a pit of quicksand — it wasn’t what you intended to happen, it’s quite a mess, and the more you struggle and panic the worse it usually gets.

The solution in both cases is often to remain calm and rely on your wits to improve the situation, and that’s where the St. Aloysius Flashes are at right now.

The Flashes fell to 0-3 with a 30-7 loss to Central Hinds last week, and are headed north to Greenville this Friday night to face Washington School. The Flashes still have a lot to play for, with both a district championship and a wild card playoff berth still very real possibilities, but need to start improving their situation to keep both on the table.

“We’re in a situation now where we can’t let desperation set in, because then you start looking over your shoulder as soon as something goes wrong,” St. Al coach Michael Fields said. “But we’re working and getting better every week, and sooner or later things are going to go right for us.”

Depth has been one contributing factor — the Flashes only have 20 players on the roster in grades 10-12, and are thin on the offensive and defensive lines — but so has a tendency for the defense to give up big plays.
Four of the 12 touchdowns they’ve given up so far this season have been from longer than 40 yards. Last week, Central Hinds running back Prentice Brown also broke off a 45-yard run that led to a shorter score.

The Flashes have allowed 968 rushing yards in three games.

“That’s coming from inexperience and youth, and not playing every down at 100 percent,” Fields said. “When you’re young you might play two downs really well and then ease up on third down. Teams with a little experience understand you have to get it done on every down, and hopefully we’re starting to realize that.”

Class AAAA Washington School has been a nemesis for St. Al since the latter joined the Mississippi Association of Independent Schools in 2015. The Generals have claimed wins in their two previous meetings, and play a physical brand of football that has left the Flashes nursing some injuries each time.

In this go-round, however, Washington and St. Al might be closer to kindred spirits. Washington is also 0-3 with lopsided losses to Class AAAA powers Jackson Academy and Jackson Prep on its resumé. Washington lost 35-28 to East Rankin Academy last week, after being outscored 74-7 in its first two games.

“They’ve played Prep and JA and East Rankin, so they’ve played a tough schedule,” Fields said.
And now they’ll play St. Aloysius in a matchup of two winless teams looking for a lifeline.

Thanks to the MAIS wild card system, which awards extra power points for beating teams in a higher classification, a win this week would go a long way not only for St. Al’s confidence but its postseason hopes as well. St. Al earned a wild card berth in 2016 with a 3-7 regular-season record — and after an 0-7 start to boot — so there’s still plenty of time to make the season a good one.