Vicksburg Convention Center will get a new escalator 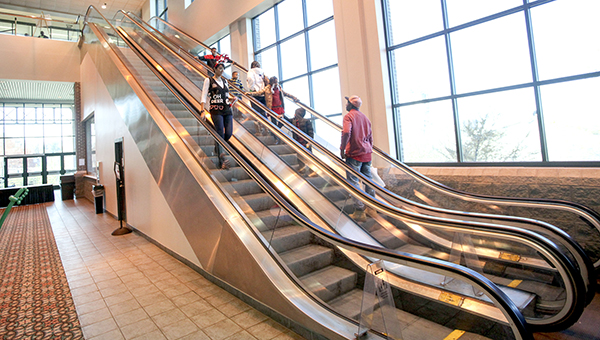 The malfunctioning escalator at the Vicksburg Convention Center will be replaced. (Courtland Wells | The Vicksburg Post)

After years of frustration, breakdowns and funny noises, the Vicksburg Convention Center is getting a new escalator.

The Board of Mayor and Aldermen Tuesday approved a $118,500 contract with Jackson-based Cook Farr Douglas Lemons Architects & Engineers to prepare designs and specifications to replace the convention center escalator, upgrade its elevator and repair a retaining wall at the convention center.

“We’re very excited about it,” convention center director Annette Kirklin said. “We’re excited to let people know (about the new escalator), because we have clients who come every year going, ‘Y’all had to call somebody when I was here.’

“Knowing that won’t be an issue in the near future is very promising and very fun to let clients know.”

“We’re still having some issues,” Kirklin said. “It’s doing the clunking, but it’s not doing the squeaking, which is helpful. We have all the noises down to what they are as far as the names of them.”

She said the elevator will be improved under the project.

“To have the elevator, it’s going to be nicer and faster, and they’re going to do some enhancements to the elevator, which will be extremely helpful.”

The 20-year-old retaining wall, which was built during the convention center’s construction to prevent the slope the VCC was built on and Mulberry Street from sloughing off because of erosion, will also be improved.

The contract gives Cook Farr Douglas Lemons 45 days to design and prepare the plans and specifications for the project.

Kirklin said the project will provide accommodations to help people get to the convention center’s exhibit hall downstairs during construction.

“They understand what they (visitors) go through here is a reflection on Vicksburg.”