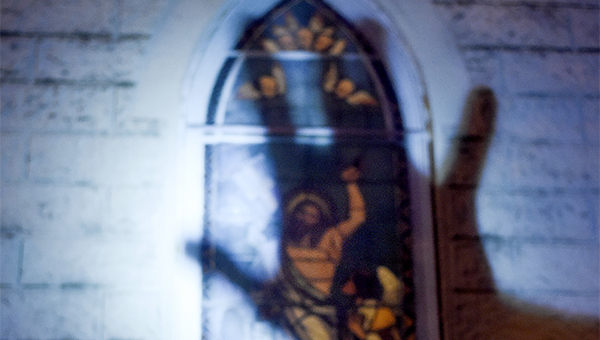 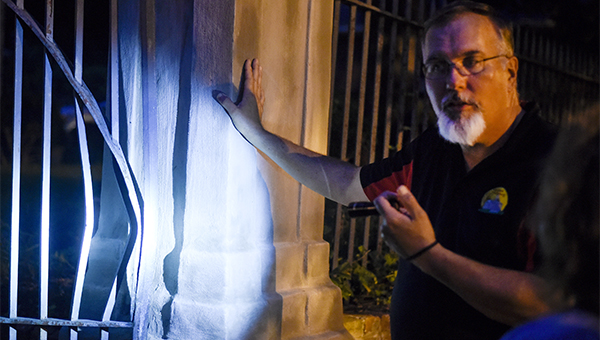 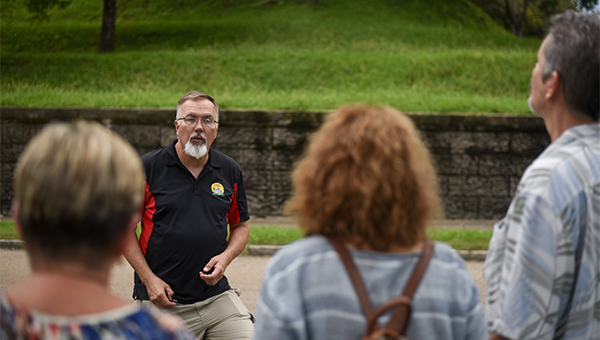 Blue skies had faded to gray and daylight was barely hanging on.

It would only be a matter of minutes before the sun would be completely snuffed out.

Crickets could be heard chirping in the distance and a warm breeze rustled the grass as a small group gathered at a circular park at the corner of Monroe and Grove streets.

The group had gathered for an evening of folklore and fascination.

They had gathered for a ghost tour, and if one were to actually see a ghost or two while on the tour, that is just extra.

Founded and managed by Morgan Gates, Haunted Vicksburg Ghost Tours gives supernatural seekers an opportunity to learn facts about some of the River City’s most historic locations, while also giving accountsof its ghostly tales.

“I do not try to convince anybody there are ghosts, I just tell them to come and enjoy the tour as a tour,” Gates said. “It’s an excellent tour. If you don’t want to believe that’s fine, but there are plenty of people who have taken the tour who are not believers and have come back believers, because something will have happened.”

Gates, who is a former educator, holds Master’s degrees in history and English. For more than 30 years he taught history with the Vicksburg Warren School District. Nearing the end of his tenure with VWSD, he said he became a certified battlefield guide for the Vicksburg National Military Park, and in 2010 he started the Haunted Vicksburg Ghost Tours.

Since its inception, the ghost tours have been popular, Gates said, with a diversity of visitors.

Gates admits history is his first love, but his curiosity for the supernatural is also vigorous, due in part, he surmises, because of his birthday.

The idea of starting ghost tours began after Gates and his wife visited the Gettysburg National Military Park in Gettysburg, Pa.

“A few years back my wife and I took a trip to their military park and along the way we discovered they had a ghost tour, so we took it,” he said.

“Many historic cities have ghost tours,” Gates said, which had come as a revelation since he said he had only known of people telling ghosts stories around Halloween.

Upon returning home to Vicksburg, Gates began doing research on the city’s history. He also talked with those who owned historic homes and began collecting stories.

“The tours are a mix of the history of old Vicksburg along with ghost stories,” Gates said. “Some of the stories are old legends that have been told around here for years. While others are events that have happened to people that have been relayed to me over the years.”

On the tour, Gates’ material includes histories of the old homes and stories of the Civil War, along with any of the negative energy events that happened around Vicksburg in its long history.

There were also epidemic diseases in the city, Gates said.

“There was a huge epidemic of yellow fever here in 1853 and again in 1878, and we believe this has left Vicksburg with a large family of spirits.”

Gates is a master when it comes to weaving the explainable with the unexplainable, offering those on the tour an ethereal evening.

On some nights, he claims that interesting pictures can be snapped. He even shows evidence by holding up a few of the images he has captured. Along with his phantom photos, Gates says, he has also experienced ghostly occurrences.

One of the most notable followed one of his tours, he said.

“One night we had just gotten through with the tour and it had been one of those nights where absolutely nothing out of the ordinary had happened. I was packing up by the van and was standing alone in the middle of the street when I felt a hand on the small of my back, very plainly. It was a small hand, so I look around thinking someone was still there, but I was all alone and could see a block in every direction. There was nobody on the street,” Gates said.

“Things do happen,” he said, which can also include sudden smells or changes in the temperature.

“When most people think of a ghost they just have a full body apparition, like here is Casper the Friendly Ghost or here is something from ‘Ghost Busters’,” Gates said. “It is not always that way. Sometimes it is a smell that shouldn’t be there, a temperature change, or a strange feeling. Some people talk about how they are sick or how there is a pressure on their chest or how the hair stands up on the back of their neck with a cold chill running down your spine. There are lots of different kinds of manifestations of spirit visitation.”

All tours are family friendly, he said.

To complement the ghost tours, Gates has also written “A Walk On the Dark Side,” which features some of Vicksburg’s history, legends and folklore including some of the stories told during the tours.

And because Vicksburg’s paranormal premises intrigue others, Gates and his Haunted Vicksburg Ghost stories will be a feature on “Ghost Adventures,” which is aired on the Travel Channel, and “Haunted Towns” produced by Destination America.

Additional information on Gates’ ghost tours can be found by visiting hauntedvicksburg.com.