Vikings square off with perennial Louisiana power Neville on Friday 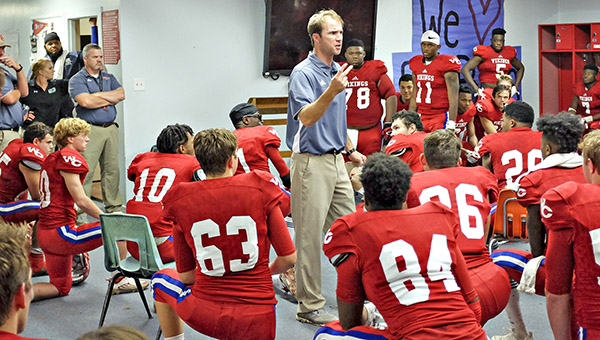 Warren Central coach Josh Morgan delivers a speech in the locker room at halftime of last week’s game against Vicksburg. This Friday, the Vikings will host Neville High School, which has reached the Louisiana Class 4A championship game each of the past three seasons. (Courtland Wells/The Vicksburg Post)

Of all the challenges for Warren Central during a difficult non-region schedule, one in particular stood out as the most intriguing — this Friday’s matchup with perennial Louisiana power Neville at Viking Stadium.

It’s the first-ever meeting between the schools, and Warren Central’s first against any Louisiana team since it played West Monroe in 1998. Neville has played in the last three Louisiana Class 4A championship games — it won in 2014 and 2015, and lost in 2016 — and has only lost two regular-season games since the start of the 2011 season.

The mix of mystery and mystique has made this a game coach Josh Morgan says even he has been looking forward to since it was added to the schedule last spring. The game was added when Natchez ended its long-running series with Warren Central.

“When we started to do our rescheduling, we wanted to play a good football program but one that was close to us. We jumped at the chance to make it happen,” Morgan said. “A lot of folks around here don’t know about Neville, but it’ll be a very good test for us coming into the district. This is like playing the Madison Centrals and the South Panolas.”

Neville’s mystique took a bit of a hit in last week’s season opener, when it lost 19-10 to Ruston. That was the Tigers’ first loss to a Louisiana team in the regular season since 2010 — coincidentally, also against Ruston — and snapped a 50-game home winning streak.

Neville also lost early in the 2014 season to Longview, Texas, but otherwise has only lost deep in the playoffs since its run of dominance began in earnest in 2011.

The loss to Ruston was a shocker, but not a result Morgan said his team needed to believe they have a chance to win this week. After all, Warren Central has more than held its own in Mississippi by winning 39 games in the past four seasons plus. Just two weeks ago it nearly knocked off Class 6A’s top team, Pearl, on the road.

“It doesn’t make a difference if (Neville) won or lost coming in here. We didn’t need to see if they’re invincible or not for our guys to have confidence,” Morgan said. “These guys have been playing top-level competition in Mississippi for a few years now. It’ll be an interesting game, and that’s why we wanted to play them.”

It’s also an important game for the Vikings (2-1), whose schedule doesn’t get a lot easier after Neville heads back across the Mississippi River to Monroe.

The Region 2-6A opener against a strong Northwest Rankin team looms after a bye week. Other region opponents include No. 4 Madison Central (3-0), No. 5 Starkville (2-1) and defending Class 6A champion and heated rival Clinton (1-2), all in a four-game stretch in October.

Heading into that gauntlet with a 3-1 record and a shot of confidence, as opposed to being .500 and on a downer, is what this week is really about, Morgan said.

“You’re fixing to head into a bye and then district, and the confidence level is on the line more than anything else,” Morgan said. “This is the last test before district, and there’s still some things we need to see. Heading in with that mindset is going to carry a lot of weight.”