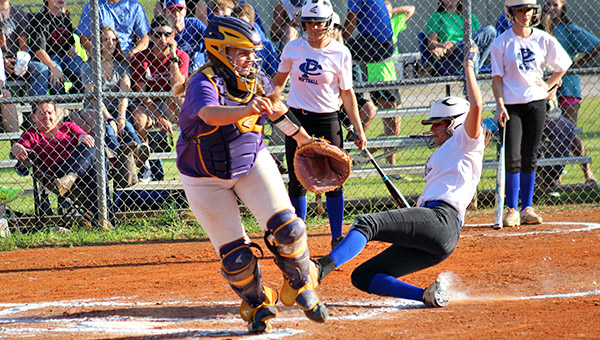 The high school softball season has been one long rain delay for most teams this season, but Porter’s Chapel Academy left the Betty Hearn Complex walking on sunshine on Thursday.

PCA pitcher Hannah Embry had nine strikeouts, and also went 3-for-3 with two RBIs at the plate, as the Lady Eagles beat crosstown rival St. Aloysius 9-3 in the first game of a doubleheader. PCA then completed the sweep with a 14-6 victory in game two.

PCA improved its record to 6-4 overall and 5-0 in District 3-AAA in only its seventh playing date this season. It played three games in one day at a tournament in August, and has had a number of other games rained out.

“You play two games and get in a rhythm, and then you’re back in the gym for two weeks,” PCA coach Amanda Yocum said. “Just the lack of field time right now is our biggest struggle, especially when it comes to being patient at the plate. You hate to walk, but at times that’s more beneficial to you in the long run.”

PCA walked plenty on Thursday — 10 times in all in the five-inning game shortened by a 90-minute time limit. It also took advantage of several wild pitches to score runs, including a pair in the second inning that helped it take a 5-2 lead.

PCA added four more runs in the third inning, and had a chance for more in the fourth. A double play grounder back to the pitcher with the bases loaded, along with another easy grounder, ended the threat.
The Lady Eagles finished the game with seven hits.

The Lady Flashes were playing just their fifth and sixth games of the season, and first since Aug. 24.

Annabeth Miller went 1-for-3 with an RBI and two runs scored for Porter’s Chapel. Carlyle Smith walked twice and scored two runs, and Shelby Barwick walked twice, scored one run and drove in another.

Despite the uneven flow of the season, Yocum said she was happy to reach the halfway point of the district schedule undefeated.

“I’m very happy. The plus is, with the way things have transpired we haven’t seen two of the strongest pitchers in the district yet,” Yocum said. “Hopefully we can see some sunshine for the next few weeks so we can get some time in on the field.”

In game two, the teams traded lots of runs early as PCA wound up with an 8-6 lead after two innings. The Lady Eagles then took control with five runs in the fourth inning to win 14-6 in another time-limit shortened victory.

Embry, Hannah Ashley and Rheagan Smith all drove in two runs apiece for PCA, and Ashley and Sabrina Embry had two hits each.

McDonald went 2-for-2 with an RBI for St. Al, while Upshaw and Brooklyn Richards each had two hits and two RBIs.