PCA’s defense coming into its own 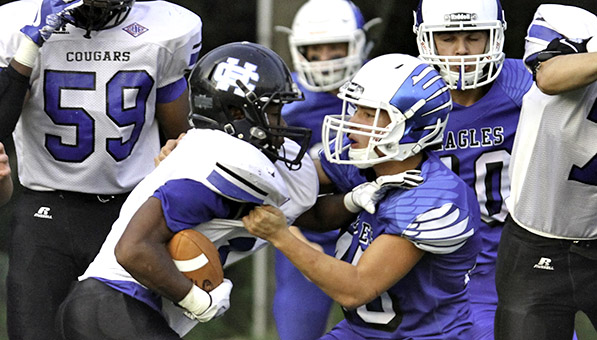 The big story for Porter’s Chapel Academy so far this season has been the resurrection of its offense. Through three games, the Eagles have already scored more points (106) than they did in the last two seasons combined (96).

Meanwhile, with the focus going in that direction, the team’s defense has quietly put together a great stretch.

The Eagles have posted one shutout already — their first since 2014 — and held Hillcrest Christian to seven points last week. They’ve forced nine turnovers and scored one defensive touchdown.

PCA coach Blake Purvis said the balance is creating a perpetual motion machine, where the offense and defense feed off each other and the team succeeds.

“The defense is getting overlooked. It’s gotten overshadowed by two great games of running the football, but that’s set up by the defense,” Purvis said. “They’ve given us good field position and haven’t put us in bad spots.”

Even during last year’s dismal 1-9 season, defense was a bright spot for PCA. It often kept the team in games until inevitably wearing down in the second half, leading to scores that quickly spiraled out of control.

This year, with increased depth allowing the Eagles to have separate offensive and defensive units instead of every player going both ways, everyone is fresher and the overall performance has improved tremendously. PCA allowed an average of 34.7 points per game last season. So far this year, that’s down to 9.3 points per game.

“I feel like we’re playing really well on defense. What’s different about this year and last year is, last year nobody got a break. We didn’t have enough people. This year, we have enough kids. We have a solid 10 people playing defense and 10 people playing offense. Everybody is staying fresh,” said defensive lineman McKinley Skipper, who has 21 tackles and three sacks this season. “We have way better leadership. Everybody’s keeping everybody on their feet, keeping everybody alive. When something goes good, we get fired up. We’re just hitting them hard and dominating.”

From a tactical standpoint, Purvis said a big part of the Eagles’ success on defense has stemmed from playing fast and rushing the passer — two things that they’ll have to dial back a bit against this week’s opponent Central Private (2-1).

Central Private utilizes a triple option attack that thrives on misdirection and defenders missing assignments. It’s a unique offense that’s hard to prepare for in a week’s time, largely because it requires a highly cerebral approach rather than physical talent and hustle to stop.

For a defense based on those latter two traits, it means consciously fighting instincts honed through months of training.

“It’s very tough, because it’s a lot of assignments for the defensive guys and disciplined play. When you’re trying to rein them in and keep them on their assignments, it’s a difficult task,” Purvis said. “We really only get about one day of defensive work in a normal week. We’re going to try to spend a little more time on it this week.”

This week is the donut hole in a stretch of three District 3-AAA games in four weeks, as well as the one before next week’s highly anticipated first-ever matchup against crosstown foe St. Aloysius. It’s still vitally important for the Eagles to get a win, however.

After routing Columbus Christian 48-0 in the season opener, they slipped up the following week and lost to Riverfield in the district opener. The Eagles bounced back last week with an easy win over Hillcrest, and now are looking to dig in their talons and not lose the progress and momentum they’ve gained.

“When you have success, you build off it and gain momentum,” Purvis said. “Hopefully you can turn it into a season-long success and not a weekly success.”