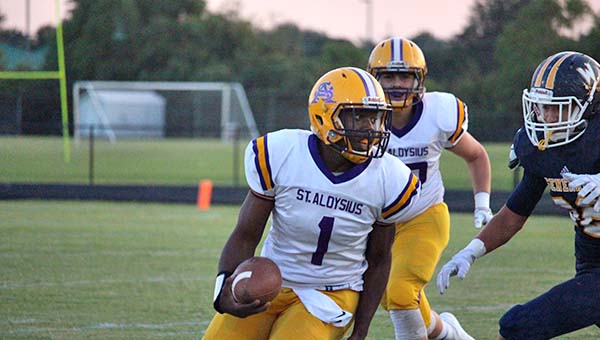 GREENVILLE — Two critical first-half turnovers proved costly for St. Aloysius on Friday night as Washington School took a 35-7 victory to earn its first win of the season and keep the Flashes winless.

Washington opened a 28-0 lead at halftime and went on to hand the Flashes their fourth consecutive loss.
Despite the bad start, St. Al coach Michael Fields remains confident. He pointed out last year’s team fell to 0-7 before turning things around and making the MAIS Class AAA playoffs.

They also started 0-4 in 2015 and made the playoffs. In both years, they won a share of the District 3-AAA championship.

“I told the kids we are 0-4 and we’ll just try and make that turn around a little quicker, which we have to because the district games are earlier this year,” Fields said.

After St. Al recovered a fumble inside its 5-yard line early in the second quarter, it coughed the ball right back up and Washington punched it in to take a 14-0 lead with 9:17 to play in the first half.

“The defense made a good stand inside the 10 and we gave it right back to them,” St. Al coach Michael Fields said. “We are just one or two steps from getting over that hill. I think we grew up some tonight.”

John Martin Walker scored the first of his two touchdowns with 5:54 to play in the opening quarter to give Washington a 7-0 lead. The running back added another touchdown with 1:51 remaining in the second quarter to make it 21-0.

A failed St. Al flea flicker led to the Generals’ final score of the first half when the ball was picked off near midfield. Quarterback Farel Hathaway’s TD toss made it 28-0 at the break. Zach Zepponi added a first half touchdown run for Washington following the St. Al fumble.

The Generals added a third-quarter touchdown, going 90 yards with Walker scoring from a yard out with 4:51 left for his third TD of the night.

St. Al quarterback Antonio Thompson and receiver Ryan Theriot hooked up on a 27-yard touchdown toss with 2:14 left in the game for the Flashes’ only score.

Looking for a bright spot in the loss, Fields noted that Connor Smith had four punts averaging 39 yards.

“Our special teams did a good job tonight,” Fields said.

The Flashes will now prepare for their long-awaited meeting at Porter’s Chapel Academy next Friday in a key District 3-AAA game.

It’s the first time the two Vicksburg private schools have played a regular-season football game against each other.

“I think we’ll be a different team next week,” Fields said. “We’re going to throw caution to the wind. I see some good things coming.”