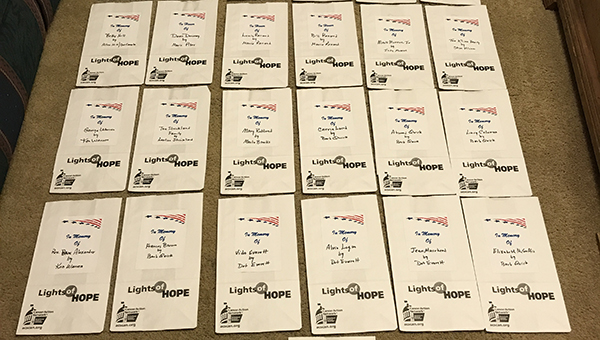 housands of luminaries like these will line the Lincoln Memorial in Washington D.C. Sunday to raise awareness for cancer research. (Submitted•The Vicksburg Post)

Pearl Carter has been battling cancer both personally and for others. The cancer survivor is now taking her fight to the nation’s capitol.

The Vicksburg resident and several hundred like her will be in Washington D.C. this coming week to take part in the annual American Cancer Society Cancer Action Network’s Summit, where they will meet with Congressional members to ask for more funding for cancer research and funding. The ACSCAN volunteers want to “make fighting cancer a national priority.”

“We have appointments scheduled with them or their staff,” Carter said.

She is hopeful that the meetings will lead to more funding for cancer research.

“We have been able to get several bills passed over the years and in the last two years have seen a commitment for funding research more so than in the past. We went several years where we were flat lined.”

The National Institute of Health received an increase in funding last year and “we’re hoping to get another increase this year.”

As part of the event, there will be a “Light of Hope” ceremony at the Lincoln Memorial where volunteers will surround the reflecting pool with thousands of luminaries in honor of those who have lost the battle with the deadly disease, continue to fight or who have survived cancer.

Carter, who is leaving Sunday morning on a flight to D.C., has created 38 bags of her own and 40-plus more from online donations to raise $1,220 for the American Cancer Society.

“These Lights of Hope serve to remind me that each of us can be a light for a cure for cancer,” said Carter, an ACSCAN volunteer since 1991.

This will be her tenth trip to the nation’s capitol as part of the National Leadership Summit and Lobby Day.

“Light of Hope” began in 2011 at the National Leadership Summit and Lobby Day with 1,200 bags lining the capitol’s reflection pool.

Carter has been diagnosed with cancer on four different occasions and is currently dealing with leukemia. A treatment she received in December has kept the leukemia under control.

“This is very personal,” said Carter, who has had several family members impacted by cancer.

“I have an intense need that I have to do what I can to help cancer patients.”