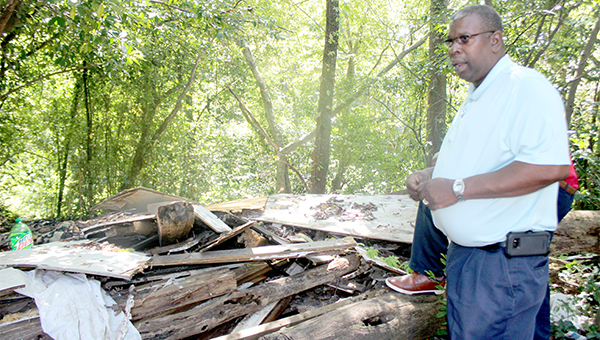 “We just cleaned up a big illegal dump here about three months ago, and they’re already starting a new one,” he said.

Mayfield, who supervises the city’s public works department and community development, which is responsible for enforcing the city’s building and sanitation codes, has been waging a war against illegal dumps in the city for more than eight years.

He said there is no way of accurately determining how many illegal dumps are in the city, “But I know of at least 20. We have some places where illegal dumping has been going on for 20 years. We clean them up and the people come right back and dump again.”

“It makes no sense,” he said. “People know they’re not supposed to be dumping. We clean them up and people come right back to the same spot and do it again; you’d think they’d get the message. There are no more grants to clean these, so the money to clean them comes out of the city coffers. We’re probably about $600,000 in the hole cleaning them up.”

The majority of the offenders, he said, are small contractors, who, instead of charging a customer extra to properly dump the construction materials, will locate some secluded or vacant area in the city to dump their trash.

Construction materials are not the only things dumped illegally. Yard debris like limbs and branches, old furniture like broken tables, sofas and mattresses, things that Waste Management is required under its contract with the city to pickup once a week, are also dumped in wooded areas or on vacant lots.

“People will drive by a secluded place and remember it, and then late at night or early in the morning, like 1 or 2 o’clock, they’ll bring their truck or a trailer full of stuff and come back and dump it,” Mayfield said.

Mayfield said most of the illegal dumps are in the North Ward, because it has more vacant lots and secluded areas where few people live or travel.

“We have one site on Fort Hill Drive that has been a problem area for years,” he said.

The problem with enforcing the city’s dumping ordinance, he said, is not being able to catch the offenders in the act or identify them.

“What we need is for people in the neighborhoods to be vigilant. We work with the police to be vigilant, and they have called in some illegal dumps. What we need is the residents to be watching, and if they see someone dumping illegally to call me. I won’t put anyone’s name out there; all I want is a tag number and description of the vehicle. If I get a tag number, I’ll sign the affidavit myself.”

He said a tip from a resident allowed him on one occasion to catch a dumper in the act.

“I drove up to catch him kicking the stuff out of his truck. I had called the police, and the officer arrived the same time I did and he was able to charge him.”

“We’re going to catch these people dumping and make them pay for cleaning it up.”