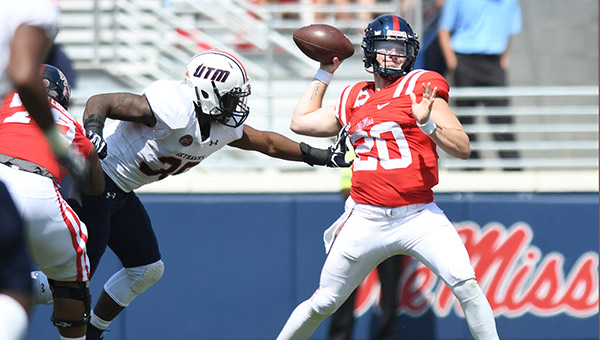 “It’s crazy,” said Patterson, who finished 32-of-43 passing for five touchdowns and a single-game record of 489 yards. In two games, Patterson has thrown for 918 yards, nine touchdowns and connected with 10 different receivers.

The list of Ole Miss quarterbacks is impressive, including Charlie Conerly, Jake Gibbs, Archie Manning, Eli Manning, and last year’s previous record-holder, Chad Kelly. In the process of moving to the top of the list, Patterson directed the Rebels (2-0) to five consecutive scoring drives, accounting for 31 points that spanned the second and third quarters.

“To be mentioned with anything connected to Eli and Archie (Manning) is an honor,” Patterson said. “No one person can break a record. It takes more, so I just thank my teammates. That’s what makes us dangerous, we have so many weapons.”

“Shea keeps getting better and we made plays,” Ole Miss coach Matt Luke said. “I thought we came out slow, but late in the second quarter and in the third quarter, we started to execute. We can improve even more. We left some yards and points out on the field.”

UT Martin (1-1) led 16-7 in the second quarter before the decisive five-series scoring outburst to settle the issue midway through the third. Quarterback Troy Cook, Marquez Grayson and Ladarius Galloway scored on runs of 2, 2 and 4 yards, respectively, for the Skyhawks.

Galloway rushed for 188 yards, including a memorable inside power run, moving the pile for 10 yards while smothered by Ole Miss defenders.

“I’m proud of our players. I thought they played hard and showed toughness,” UT Martin coach Jason Simpson said. “Give them credit. They have an outstanding quarterback. You kind of have to pick your poison on what you want to focus on stopping.”

Patterson’s pace was impressive as each of the seven scoring drives took less than 3:26, including four that were finished in less than two minutes.

“If we go 75 miles per hour this week, we’d want to go 85 next week and eventually get to 100 miles per hour,” said Patterson, who now has two of the four 400-yard passing games in Ole Miss history. “We always want to get a little faster. There’s always room for improvement.”