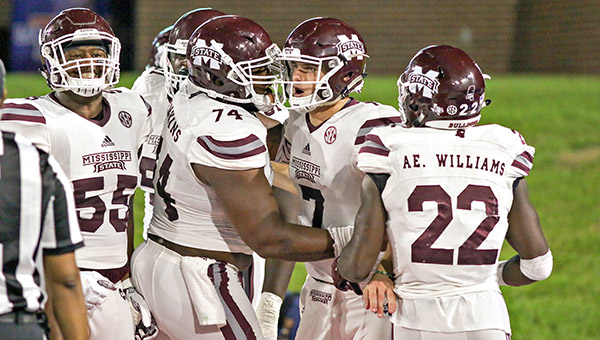 RUSTON, La. (AP) — Mississippi State coach Dan Mullen took a long look at a sheet of statistics that included three blocked extra points, one blocked punt and an 87-yard fumble, and came to the same conclusion as thousands of other college football fans.

“It was a strange game at times, wasn’t it?” Mullen said.

It undeniably was. But it was also an enjoyable one for Mississippi State, which fought through some of those offbeat plays to easily beat Louisiana Tech 57-21 on Saturday night in an entertaining and sometimes bizarre non-conference win.

Mississippi State’s Nick Fitzgerald threw for three touchdowns and ran for two more in some of the game’s more conventional moments.

Defensive tackle Jeffery Simmons was one who handled a few of the spectacular moments. He scored two touchdowns, one after blocking a punt and recovering the ball in the end zone, and another after recovering a fumble and running 90 yards for the touchdown. It was the first time a Mississippi State defensive player scored two touchdowns in a game since Johnthan Banks in 2009.

“The defense did my job about half the night for me,” Fitzgerald said.

Louisiana Tech jumped out to a 9-0 lead, partly thanks to an errant Fitzgerald throw that was intercepted by Amik Robertson and returned to Mississippi State’s 2-yard line. Two plays later Kam McKnight ran for a 1-yard touchdown.

That’s where the good news ended for Louisiana Tech. Mississippi State (2-0) scored the next 36 points to push ahead 36-14 at halftime. Fitzgerald scored on a 44-yard run just 33 seconds into the second half to stretch the advantage to 43-14 and erase any doubt about the outcome.

“The defense really buckled down and completely shut them down,” Mullen said. “Then we started rolling on offense and hit some big, explosive plays and played well for the most part.”

The strangest play of the night happened early in the fourth quarter when MSU already had a 57-14 lead. Louisiana Tech was driving down the field and at the Mississippi State 6-yard line when a bad snap set off a wild scrum for the football.

Multiple Mississippi State players tried to pick up the football, but instead kicked it farther down field. Louisiana Tech’s Cee Jay Powell finally fell on the ball at the Bulldogs’ own 6-yard line.

The final tally: An 87-yard loss that left Louisiana Tech facing a third-and-93 at their own 7. Not surprisingly, the Bulldogs couldn’t convert.

“I hate the mistakes that we made,” Louisiana Tech Skip Holtz said. “The things we did, we shoot ourselves in the foot, which makes it very difficult to beat a very talented SEC team like Mississippi State.”