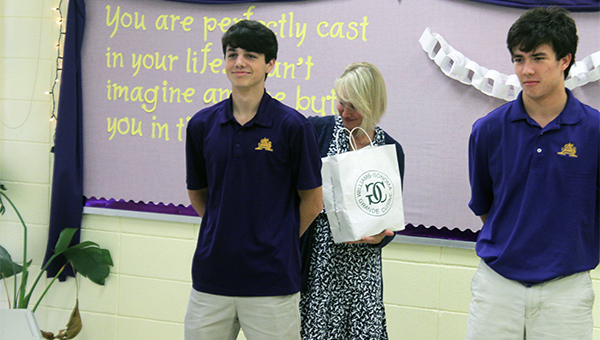 St. Aloysius performing arts student Sean Simpson receives his prop from teacher Chesly Lambiotte during a prop quiz where students had to take a prop and use it as inspiration for a scene. 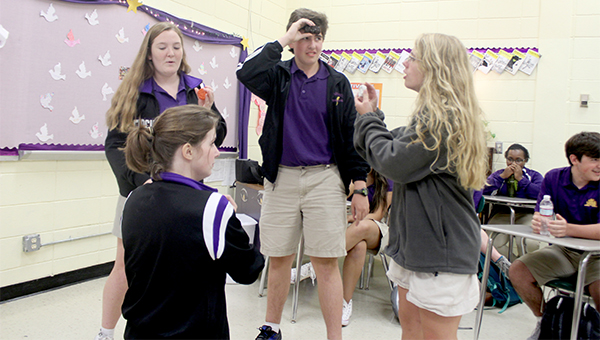 St. Aloysius performing arts students Sarah Jane Pierce, Ella McHan, David Osburn and Mattie Carlyle Derivaux improvise a scene during a prop quiz where students had to take a prop and use it as inspiration for a scene. 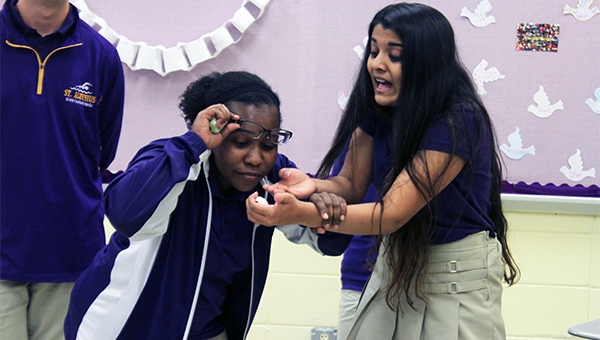 St. Aloysius performing arts students Catrina Winters and Shivangi Nakoom improvise a scene during a prop quiz where students had to take a prop and use it as inspiration for a scene. 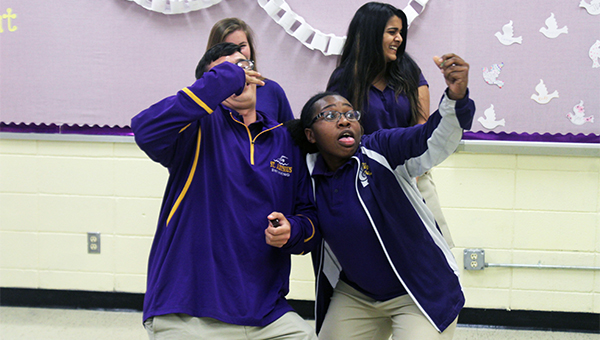 St. Aloysius performing arts students Chuck Beamish and Catrina Winters improvise a scene during a prop quiz where students had to take a prop and use it as inspiration for a scene. 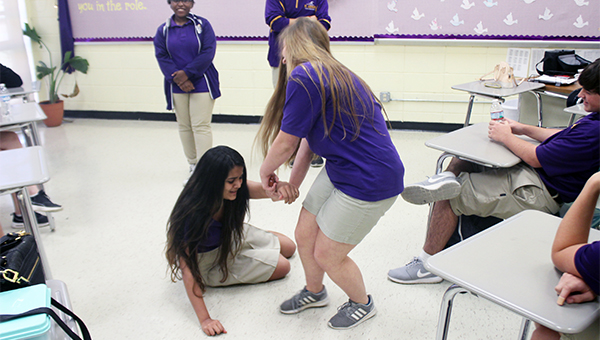 St. Aloysius performing arts students Shivangi Nakoom and Emily Wallace improvise a scene during a prop quiz where students had to take a prop and use it as inspiration for a scene. 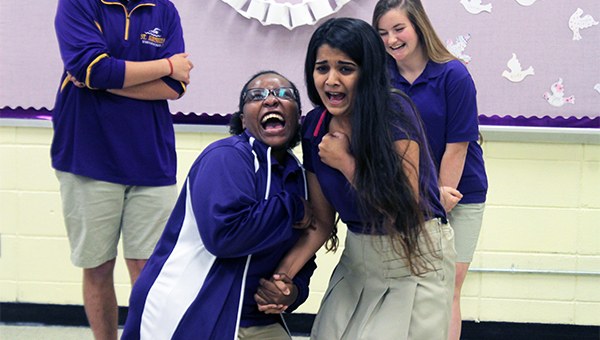 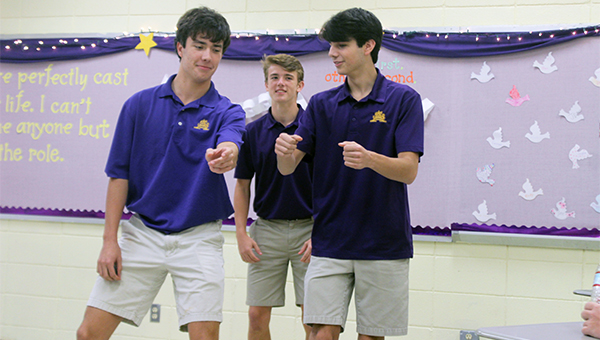 St. Aloysius performing arts students Braxton Chewning, Ryan Theriot and Sean Simpson improvise a scene during a prop quiz where students had to take a prop and use it as inspiration for a scene.

A few simple props opened up a world of possibilities for students in St. Aloysius’s new performing arts class as they worked to hone their improv skills Monday afternoon.

Small pottery pieces made by visual arts students served as the inspiration for students during a prop quiz where teacher Chesley Lambiotte gave each student a small Jack-o-lantern, bat or ghost and no directions other than move the scene forward, answer questions with “Yes, and” and that there are no mistakes.

“The third one is the most beautiful one. I have been overjoyed to see the progress,” Lambiotte said. “The fact that you are going to tell a teenager there are no mistakes and what you are going to do right now, the scene you are about to create, there is no wrong way to do it. You get it, you go with it and you keep it moving.

“It was kind of like the butterfly emerging from the cocoon. It was the most beautiful thing to see. Now, it is like second nature. They are all jumping up to go.”

The small pieces of pottery became shrink rays, cookies, a telephone and even a constellation during a period of stargazing as the students crafted scene after scene.

“You just look at it and you don’t think about doing anything right,” student Sean Simpson said. “You just look at the prop and you do what first comes into your head and you make a scene out of it. That is what is fun about it. You know you can go out there and do whatever and no one is going to think you look stupid.”

The performing arts class is part of a renewed emphasis on the arts at St. Al to go along with the visual arts classes that were already in place. There are also plans to expand the music program in January and add a show choir as early as next year.

“The arts are a part of everything,” St. Al principal Buddy Strickland said. “It is important to us for our graduates to be well rounded, to have opportunities to explore whatever they want to explore. There are so many college scholarships available for the arts. That is a way for them to go to college.”

Students in Jennifer Ratliff’s ceramics class made the pottery pieces that were used as props during the performing arts class as part of their preparations for the Spooky Sprint 5K that will take place in October. They are also working to create props and decorations for the homecoming dance and floats for the parade.

In the near future, they will be working with the performing arts class to create costumes, props and sets for the spring musical, which will hold auditions in November.

“It (the arts) is such an outlet for so many people and for kids to be able to learn it, to understand it, to be confident in their skills so early, they can continue that as adults,” Ratliff said of the arts program. “Every year, I feel like I have some big burly football player who develops a love for ceramics and they are building these tiny delicate things. They are these big hands and arms and shoulders and they are working with these tiny bits of clay.”

The study of improv is just the first step in a growing performing arts curriculum that jumped from no classes last year to three this year because the interest was so high.

“One thing I’ve noticed in my performing arts is I am going to have my theater buffs in there, people who love musicals and who have seen Broadway shows, but I love knowing I have the star football player in my class sitting next to the mathlete of the year, sitting next to the president of the chess club,” Lambiotte said. “They are all in there together and things that they maybe were in their own groups before it is so inclusive.”

They plan to pick the play they will be performing in the spring by October and at the end of the semester each of the three performing arts classes will be tasked with writing and performing their own one act play.

“We are actually able to express ourselves and able to learn from everything that she (Lambiotte) gives us,” student Catrina Winters said. “We came in, we had no knowledge at all about performing arts. We’ve learned improv, not to turn our backs; it is just a whole lot.

In just the first month of school, a class that some students were put into because they needed an art credit has quickly become a favorite and taught them skills they can take outside of school to go along with their ever building confidence.

“I think I am better at lying.”