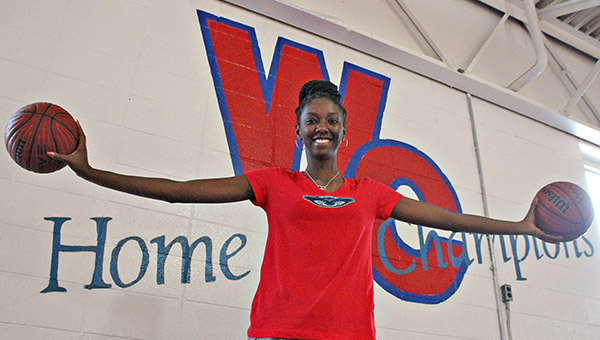 Gaston went up for the rebound, missed it, and then sprinted down the floor on a sprained and sore ankle. She caught a return pass in an awkward position under the basket, put it through the hoop for two points, and then got back on defense.

An FAU assistant coach was in the stands and was blown away by the ease with which the Warren Central star made the play. He made a few phone calls, Gaston made a few, and by the end of Labor Day weekend she had received a scholarship offer and verbally committed to the Conference USA school in Boca Raton, Florida, just north of Miami.

“I feel like this is a blessing. It’s everything I ever want in a college. It’s somewhere I want to be and where I can see me growing as a player,” Gaston said. “What they’re trying to build is a solid foundation. I definitely want to be a part of that. I want to set and break records for that school.”

Gaston is a 6-foot-3 senior center who averaged 12.1 points, 5.1 rebounds and 3.1 blocked shots while being named The Vicksburg Post’s girls basketball Player of the Year last season.

She has steadily improved from a freshman who averaged just 3.3 points and 2.2 rebounds per game, and is also one of the top students in Warren Central’s Class of 2018. Coach Jackie Martin-Glass called her an example of what hard work and a good attitude can achieve.

“She’s like the poster child now for every group I have. I can use her as an example of a kid that wasn’t really a part of the team on the floor, but was part of the team and just came out and tried, and sacrificed,” Martin-Glass said. “She gave up dancing, she didn’t try out for any other sports. She said I’m just just going to really focus on basketball, and she did. That’s the key to success is sacrificing and working hard, and she got rewarded. I’m very happy for her.”

Gaston can’t sign with FAU until the early signing period in November, but said she’ll probably wait until the spring period begins in April to do so. Several other Division I programs have shown interest and she’d like to explore all options. Verbal commitments are non-binding. She seems sold on FAU, however, for reasons beyond basketball.

“Florida Atlantic is Division I, and when I went on my official visit it was great. I always wanted to relocate to Florida and now I can do that,” she said. “I’m planning on majoring in biology, and that’s the number one major for that school.”

Committing now also gives Gaston some security. She sprained her ankle playing a summer game with Warren Central in June and limped through a few AAU tournaments in July, including the one where she was spotted by the Florida Atlantic coach. The injury affected her play and caused some schools to back off in their recruiting, she said.

After seeing how fickle the process can be, and falling into an offer from a school that checks every box on her wish list, she said committing now was a smart business decision.

“I know a lot of people say you should wait. But it’s a business. You can’t just drag it out,” she said.

Not that she wanted to.

“I feel like a big weight has been lifted off my shoulders. I had lost most of the interest (from colleges) with my injury,” Gaston said. “The dream came true. I thought maybe I’d relocate after four years and move there. Now I get to play in Florida and experience it.”