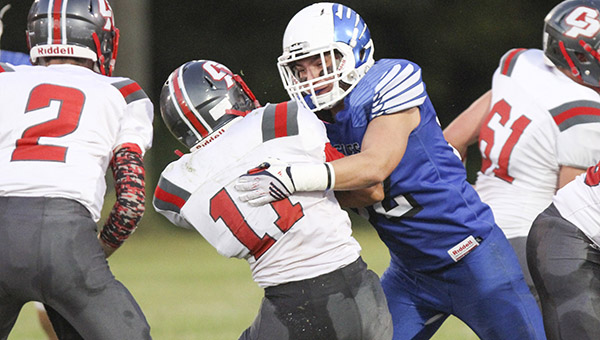 Porter’s Chapel Academy coach Blake Purvis had a simple message for his team following its loss last week to Central Private, and with the first ever football game between PCA and crosstown rival St. Aloysius on the horizon — let your game do the talking.

Stay off social media, and don’t get involved in any trash talking in the days leading up to the game. Instead, let the play on the field be the only message you need to send, Purvis told his team.

This Friday night, PCA (2-2) will host St. Al (0-4) in the first regular-season matchup between the two Vicksburg private schools. They played in a preseason jamboree in 2016, but have never met in a game that counted. This one carries the added weight of being a MAIS District 3-AAA match-up.

“I hope it is treated just like any other week,” Purvis said. “They show up, they work, they know it doesn’t matter who we play. We’ve got to do what we do and prepare the best we can and then come out and get off to a good start.”

Construction is under way alongside the PCA parking lot to create additional parking before the matchup, and fans at Friday’s game were advised to make sure they get there early this week if they hope to find parking and a seat.

“I think we should just have our normal week of practice, hard and intense with everybody giving 100 percent and no jacking around. We will go out there and we will be ready for it,” PCA quarterback Tristan Pickering said. “It is going to be a big game and there are going to be a lot of people here. I believe it will be a good, well fought game.”

After losing to Central Private 41-0 last week, the Eagles will be working to get back on track against a St. Al team looking for its first victory of the season. St. Al lost 35-7 to Washington School and has scored only scored 41 points in its first four games.

The Eagles’ offense struggled to move the ball against Central Private as they were held to just 155 yards and committed four turnovers. On defense, the Rebels’ triple option attack confounded PCA throughout the game as they struggled with missed assignments and poor tackling. Central Private ran for 260 yards.

The Eagles hope the added motivation of St. Al coming to their stadium will serve as a catalyst for a good week of practice.